I am not a To Kill a Mockingbird groupy. I wasn't delighted when I heard there was a prequel/sequel coming out, and I'm not shocked and disappointed over what I've been hearing and reading about Atticus Finch's racism in Go Set a Watchman, that prequel/sequel. I actually find it interesting. Not interesting enough to read what sounds like a rough draft, but interesting.

This is not to say I didn't like To Kill a Mockingbird a great deal when I read it in my early teens. I read it the way a lot of young people read it back then--on my own. It hadn't become part of the American high school curriculum. It was probably among the first adult books I read, and I read it without anyone interpreting it for me in a classroom. Years later, I would speculate with a friend about how soon my kids could read it, because I couldn't wait. She said something like, "Ah...and the rape?" And I said something like, "Ah...rape?" I had no memory of that at all, just that I'd loved the book. 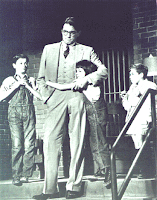 Now I reread Mockingbird as an adult. It was one of the rare situations of a book I'd liked when I was young holding up. At that point, though, I saw it as a father worship book. Atticus was a fantasy dad.

Years later, when I wrote The Hero of Ticonderoga, I would model Andrew Churchill, the out-of-state lawyer father of one of Therese LeClerc's classmates, on the Gregory Peck version of Atticus Finch. Andrew Churchill is educated, which Therese's own father is not. He wears a suit, which her father does not. His hands are clean, he doesn't work in a barn, he doesn't speak with an accent. He is Therese's fantasy dad.

He ends up being a disappointment, though, like the Atticus in Go Set a Watchman.

Posted by Gail Gauthier at 9:45 AM
Email ThisBlogThis!Share to TwitterShare to FacebookShare to Pinterest
Labels: Atticus Finch, The Hero of Ticonderoga, To Kill a Mockingbird

I totally agree, it will be interesting to see what the final draft is like.