Back in 2015 I wrote here that I refused to use guilt as a motivator. However, last week I found that shame works pretty well for an hour or so.

On Friday I returned home from a week in Seattle. I don't usually work much on vacations, but I do bring my laptop with me so I can do a little journal work and catch up on professional reading. This time, though, I left the laptop home, because I didn't want to bother bringing it on a plane. All I had with me was a traditional bound journal, a Writer's Digest, a Horn Book, and some other improving reading to do on the plane. I even printed out the chapter list and notes for the book I'm working on, figuring that surely over five days I'd be able to do something with that. 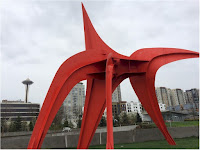 I didn't even make it to the airport in Boston before I decided I needed some lighter reading. I picked up Mindy Kaling's latest book at a news stand. Temptation. I'm very fond of Mindy.

On the flight to Seattle I did nothing but shuffle back and forth between a couple of books and listen to a Backstory podcast. It had been a few decades since I'd flown, and while it appeared that I was no longer terrified of flying (who knew?), I was bored as Hell. I only said, "Are we there yet?" once, but I was thinking it, even though I was glued to the flight tracker on the monitor in front of me and kept scrolling through the same TV stations I could have watched at home.

Who can work under those conditions?

While in the Seattle area, the few hours I wasn't visiting relatives, biking sixteen miles (see how I managed to slip that in?), or doing touristic things, I spent with Mindy Kaling. Then I bought two more non-work and involving books for the flight home. Because, you know, I already had learned that it's ridiculous to think you can work on a plane.

So I was set for the trip home with The Fever by Megan Abbott and A God in Ruins by Kate Atkinson. All was good. Seriously, I had a feeling of well being while I was sitting at the gate waiting for my plane to Boston.

Then I noticed this guy sitting next to me with his laptop open. (He didn't have any concerns about traveling with it.) What did I see on his screen? (Because I looked.) Manuscript pages. The guy was a writer. And he was writing in an airport.

I immediately recalled Mindy Kaling's book, which I had just finished. This woman has a really disturbing work  ethic. By which I mean disturbing when compared to mine. She sounds as if she's always working. Even when she's drinking and eating and admiring guys, she's working because she writes about all that. If she's ever been in Seattle, I'm betting she was working.

So I'd been reading about that for a couple of days while, remember, I was doing nothing. Then this guy sits down next to me and rubs it in that he's not reading a Megan Abbott novel.

What if he sits next to me on the plane? I thought. What if I have him working next to me for four or five hours? I finally casually turned and took a look at the guy, himself, wondering if he was Sherman Alexie, who's supposed to live in Seattle. What if I had to sit next to Sherman Alexie for nearly six hours (what with takeoff and landing) and he worked through the whole trip, illustrating why he is Sherman Alexie and I'm Gail Gauthier?

Well, this guy wasn't Sherman Alexie. And he didn't sit next to me. He sat directly in front of me. I couldn't see his laptop, but I know he had it open, because I leaned around him so I could see it.

That's why I wrote most of this post in my bound journal on the plane, as well as notes for two book posts. The only reason this post is going up on time is because I did that writing on the plane. See? Shame is good.

Then I went back to reading Megan Abbott, and then I took a nap.

So shame is good, but only for a while.