What Did You Do This Week, Gail? April 16th Edition 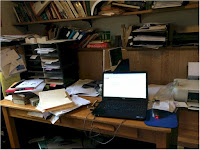 Finally getting back to real life this week.

Goal 2. Generate New Work Through End Of April--Adult Novels. I'm doing the plotting thing with this. Seriously. I came up with something brilliant for one of my characters yesterday. And for another one, too. Finished reading some research. I've got more plotting done for this project than I've ever had for a book I've only written two chapters for.

Goal 4. Make More Than 33 (last year's number) Submissions Of  Completed Work Throughout The Year. I thought I'd come up with a new publication for an old manuscript. But, nope, it folded. Worked a bit on an agent list.

Material I tweeted or retweeted:

Larger Than Life: The Fierce and Fabulous Lena Horne - http://bit.ly/2nxf4bo  via @alldonemonkey
Okay, she's not a childlit person. But she's Lena Horne. Come on.