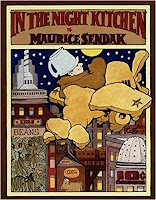 This isn't hot-off-the-presses, having been announced a couple of months back. But it's newish for me.

The Maurice Sendak Foundation has chosen the University of Connecticut to maintain Maurice Sendak's papers. According to Arthur Yorinks in a Hartford Courant article, Sendak's materials, close to 10,000 items, will be kept in the Northeast Children's Literature Collection, which is at the Thomas Dodd Research Center. I've had some terrific experiences at the Northeast Children's Literature Collection. Ate dinner there once and Lois Lowry was sitting at the very next table. Yeah. And then there was the time I gave someone a Band-aid to give to Anita Lobel while I was there.

But this is about Maurice Sendak.

Sendak was a Connecticut resident with connections to UConn. He was a guest in Professor Francelia Butler's classes back in the '70s and '80s and received an honorary doctorate in 1990.