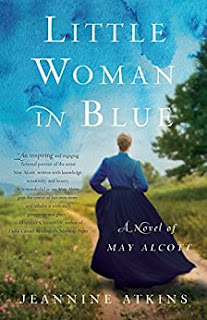 My faithful readers are aware that I can be a bit obsessive about Louisa May Alcott. I've gone on and on here about Little Men, which I reread last year. I went on and on about An Old Fashioned Girl back in 2010. Honest to God, I've read Little Women and Werewolves. I've been to Alcott's house. I've been to her grave. I've been to Fruitlands. In truth, all this activity was spread over many years. We're not talking an Alcott scholar here.

But I'm going on and on like this to explain why I was attracted to the adult book Little Woman in Blue: A Novel of May Alcott by Jeannine Atkins.

May Alcott was Louisa May's youngest sister, the inspiration for Amy in Little Women, Little Men, and Jo's Boys. This novel about her adult life is impressive in the way it uses what I, at least, know of the Alcotts' lives. There are lots of small details, like the reference to Louisa's childhood birthday party at which she had to give away all the little cakes to her guests and didn't get one herself, that I'd heard of. Or recognized from Louisa's books, which, remember, had some connection to her life. There's also playing off the books. May in Little Woman in Blue is unhappy with how she is portrayed in Little Women. And, when you think about it, who wouldn't be?

This book is a marvelous mind game for readers who have knowledge of the source material.

But it's more than that. In Little Woman in Blue May Alcott is a single woman who is overwhelmed by her family. I will hazard a guess that this is a classic theme in women's literature. In this case, the needy parents and the needy married sister and her family don't seem to even realize what they're doing or that there's anything unusual in draining their family members. I say "members" because it's not just May they're doing this to. Louisa bears the financial burden for all the Alcotts, as she did in real life. Louisa and May could be described as draining each other, too.

This book also shows the life of "single working women" in the 1860s and '70s. It sounds very much like a section in Louisa Alcott's An Old Fashioned Girl. And then there's all the talk of art and specifically art in nineteenth century Paris at the beginning of the Impressionist movement. (Read Sacre Bleu by Christopher Moore, covering the same period? I have.)

So there's something here for several different types of historical fiction readers. And good somethings.

UPDATE: Reading this book motivated me to record Little Women on PBS last night, which I would probably have passed on.


FTD Stuff: Jeannine Atkins is a Facebook friend, one I actually interact with. I purchased an eBook edition of this book during a sale period.
Posted by Gail Gauthier at 9:47 AM
Email ThisBlogThis!Share to TwitterShare to FacebookShare to Pinterest
Labels: 2015, Adult books, historical fiction, Louisa May Alcott, Reader response

Gail, it's fun to share an Alcott obsession with you. As you comment, there are so many strands in those lives and LMA's books that seem contemporary. If you are looking for another Alcott related excursion this summer, If you haven't been, I'd recommend Chesterwood, which is across from the Norman Rockwell museum in Stockbridge. Not a direct relation, but since you've covered those -- as you read in Little Women in Blue, May was Daniel Chester French's first art teacher, and I do play up his charm because I'm touched that he acknowledged her as such in his memoirs. The museum is cool in itself -- you can see a little trolley he put sculpture on then rolled it out to see how the marble looked in sunlight. But the museum also dedicates a spot to May, showing an alleged sculpture tool she gave him and he saved.

Okay, I'll stop. But you know -- obsession! Thanks so much for reading and blogging!