Well, yesterday I finally went walking around Concord, Massachusetts, presumably in the very spots many transcendentalists walked before me. There is so much transcendentalist stuff to do in Concord! We're going to have to go back.

We left the center of town and walked out to the home of Nathanial Hawthorne. We didn't have time to tour that spot, but will hit it another day because not only did Hawthorne (who, I must admit, I'm not wildly enthusiastic about) live there, but the sign out front says Margaret Sidney, who wrote The Five Little Peppers and How They Grew also put in some time there. On top of that, the place looks old and intriguing. 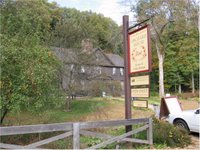 We did stop next door at Orchard House, where Louisa May Alcott lived with her family. I had toured the place once before many years ago, but you can't tour Orchard House too many times. Our tour guide was fantastic, too.

We were meeting someone late in the day, so we had to hustle back to the center of town and drive to the Sleepy Hollow Cemetery instead of walking. The cemetery contains an area called Authors Ridge where you can find a number of famous dead writers all in one place. It really is an impressive place, because it's both beautiful and modest. 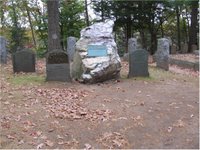 Though I'm a big Alcott fan, the most thought-provoking spot at Authors Ridge yesterday was Ralph Waldo Emerson's grave, not because of the grave itself but because someone had left him a gift--a fresh rose was lying in front of the headstone. We wandered about a while and noticed another couple visiting the Emerson family plot. When we went back to get a picture, we found that in addition to the rose, there was now a small piece of paper with writing held down with a stone on top of the grave.

What an incredible tribute because the guy has been dead for something like a hundred and twenty-five years.

By the way Eden's Outcasts: The Story of Louisa May Alcott and Her Father by John Matteson won this year's Pulitzer Prize for Biography.

Oh, thank you for the trip to one of my favorite places. I hope next time you get to walk around, or swim in, Walden Pond, where LMA swam and skated, too. I agree they have the nicest docents, who have senses of humor, at Orchard House.

I want to walk to Walden Pond from Concord. It's only supposed to be 2 miles one way. We didn't have time, though, and the person I was with placed limits on just how much walking in the paths of the Transcendentalists he was willing to do.

I hope to get there another time.