Art And History In One Lovely Package 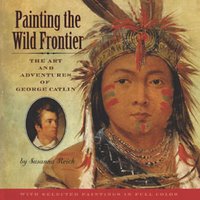 My impression of the nineteenth century is that it was a time when people had a big interest in things outside themselves—natural history, art, and philosophy, for instance. At the same time, you saw some remarkable bigotry. Susanna Reich's biography of George Catlin, Painting the Wild Frontier: The Art and Adventures of George Catlin, confirms my feelings about that incredibly interesting century.

You may not be familiar with George Catlin's name, but you've probably seen his work, particularly The Cutting Scene. Catlin was a nineteenth century artist who made painting American Indians (the term Reich uses) his life's work, both in terms of art and business. Early in Painting the Wild Frontier, Reich says of him, "Would people pay to look at paintings of Indians, he wondered, the way they paid to look at the Greek statues and the paintings of Revolutionary War heroes in Peale's museums?"

He gambled that they would.

The first part of Painting the Wild Frontier deals with Catlin the artist and adventurer. He believed the Plains Indians were still relatively untouched by contact with Europeans and seemed sincerely interested in documenting them and their lives with his art. Except for a few unattractive incidents that indicate that he was, indeed, a nineteenth century man, (the buffalo he shot but didn't kill and allowed to struggle in pain so he could sketch it from better angles, for instance, and his insistence on visiting a quarry considered a sacred site, even going so far as to take a sample of the rock away with him) Catlin comes off well during his productive years.

Making a living from art is almost always a problem, and in Catlin's case, he appears to have been a better painter than businessman. Though he ran successful exhibits in the United States and London, he wasn't able to hold on to money. An argument could be made that he also exploited Indians who appeared in his exhibitions. In his later years, he could have been a model for the artist tragically fallen on hard times.

When literary agent Nathan Bransford described his fantasy MFA Program he said, "Good nonfiction has an underlying arc and a satisfying conclusion." Reich definitely finds an underlying arch in George Catlin's life story, and while its conclusion may not be satisfying in terms of happily ever after, it's satisfying in terms of being a conclusion that fits in with what came before. While I kept hoping he would redeem himself as I read the latter part of the book, I can't say I was surprised when he didn't.

The art of our past is important because before cameras it was the only way to preserve how people and things looked. Archaeologists sometimes use art to help them date items--if a cup is similar to one in a painting from the late eighteenth century, then it, too, may very well come from that period. Thus Catlin's art is important no matter what we may think of him. Painting the Wild Frontier includes enough of it to almost be considered an art book. Some of the illustrations are in black and white, some are in color, and all are beautiful. Captions not only discuss the work, but identify the individuals in the paintings, making them real people who lived on after they were painted, who had families and perhaps descendants walking among us today.

Pay particular attention to the timeline at the back of the book, in which Reich shows us what was going on in the U.S. at various points in Catlin's life. While reading Painting the Wild Frontier, you'll definitely get a feeling for the nineteenth century world, but it's here in the timeline that you really get hit with some of the inconsistencies of the period. In 1838, for instance, while Catlin's Indian Gallery exhibit is a big hit with the citizens of four eastern cities, 4,000 Cherokee Indians die on the Trail of Tears while being forcibly relocated by the federal government.

This is a piece of work that could really get young readers interested not only in the subject covered but in reading history, period.

Painting the Wild Frontier has been nominated for a Cybil.

You can read a lot more about Painting the Wild Frontier next week, when Susanna Reich will be doing a blog tour. She'll be getting started on Monday at Becky's Book Reviews and stopping here on Thursday when we'll be talking history.
Posted by Gail Gauthier at 6:53 PM
Email ThisBlogThis!Share to TwitterShare to FacebookShare to Pinterest
Labels: art books, Cybils nominees, nonfiction, Reader response