Congressman John Lewis has died at age 80. So today I'm going to reprint an Original Content post from this past February about his very fine graphic memoir, March, Book One. Try to get hold of a copy. And you can always continue with the other two volumes in this series about his life. 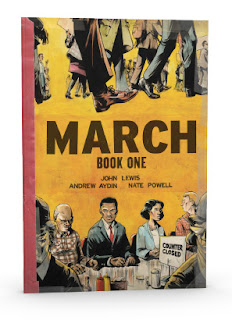 I finally read March Book One by John Lewis, Andrew Ayden, and Nate Powell. I've been hearing about it for years. This is definitely a case of a book being worth the buzz.

March is a graphic memoir of John Lewis, the long-time U.S. Representative from Georgia's fifth congressional district who has also been part of the civil rights movement for decades. Lewis has a compelling story, but it's a story that is also extremely well told in this book. The frame used--Lewis is telling his story to children on Barack Obama's Inauguration Day--is marvelous. And Lewis's influences are carefully established, all the way back into childhood. The illustrations tell a lot of the story, as they should in a graphic work. And when there is narrative in the boxes, it's in Lewis's voice. He's the narrator telling the story.

The book is well done and informative. It's a book for young readers, but also a quick read for adults, including not-very-well-informed ones like myself, about the mid-twentieth century civil rights movement. Hmm. An adult I know may get this for his birthday.

March is the first of three volumes about John Lewis. Oh, this won the Coretta Scott King Book Award, which I mentioned here a few weeks ago.  The third book in the series was the first graphic work to win the National Book Award for Young People's Literature. Just sayin'.

Be sure to read about Andrew Ayden, who wrote March with Lewis. How the two of them came up with the idea for a graphic memoir is interesting, too.

Posted by Gail Gauthier at 10:11 AM
Email ThisBlogThis!Share to TwitterShare to FacebookShare to Pinterest
Labels: graphic memoir, John Lewis