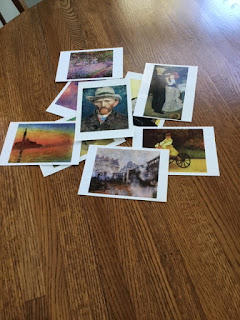 According to my bullet journal, I began sending out a postcard a week a year ago today.

I have always been fond of postcards. Family members have even been known to bring packages of them home to me from vacations. I carry an address book with a stash of post card stamps on long trips in order to be able to send post cards to very old and very young family members while I'm gone. Yes, we do end up driving around in strange cities while we look for post offices or mail boxes.

But what got me started sending them regularly last year was an essay by Peter Wayne Moe I stumbled upon at The Millions. It was called Why I Write Postcards, and it was about...ah...why he writes postcards. At the time he wrote the essay, he'd been sending out a postcard a week for five and a half years. Though, now that I am rereading the essay, I see this guy went way over the top and sometimes sent three, four, or five a week. Thus at the five-and-a-half year point, he had written and mailed out 880 postcards. 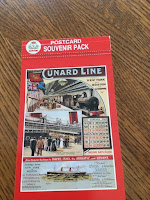 It sounds as if he interacts with people who write back and then he writes back to them, meaning I don't think he's sent out postcards to 880 different people. Nonetheless, I think he must know a great many more people than I do, because even though I've sent more than one postcard to cousins and friends over the year, I've had to struggle to reach 52 postcards over 52 weeks. I've only once had anyone send a postcard back to me, though I've had a number of people thank me for getting in touch, and I've received some texts and email responses that were just as lovely as a postcard would have been. They were like metaphorical postcards. 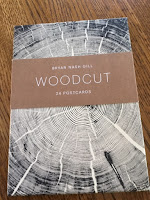 I tend to choose who I'll write to on the basis of whether or not I've thought about them recently. I write something like, "Oh, I was doing such and such the other day and thought of your mother." Or "We went to this place that made me think of you." If nothing else, the desperate hunt for something to say has made me give more thought to the people I know. 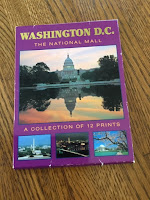 Years ago, when Moe jokingly referred to himself as a man of letters, his wife told him he'd better write some then. That's what got him started on the postcard road. I like to think I got started because it was a way of reaching out
to others, because a postcard might bring joy to someone's life. In reality, writing a postcard a week is just the kind of obsessive activity I love. If you're a Facebook friend, you know I recently started my seventh trail journal, because I manically keep track of where we've walked, biked, snowshoed, and cross-country skied. I have been writing a letter a week for the last 33 weeks to a young family member, mainly about the aforementioned walking or biking. (At 8 o'clock this past Sunday evening I was running through the house screeching, "I have to write ERJ4's letter!" And I did.) I've also made close to 95 masks and have more cut out, so I'll be going over the 100 mark soon. Most weeks I pend some time curating photos that have been texted or emailed to me into the array of albums I've stored on my iPad. And then there is this blog. Eighteen years of blogging. 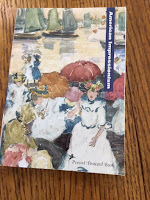 My original postcard plan was to make it to a year. I have. I can quit now. Except I've accumulated a lot of postcards, as well as postcard stamps. And I just got a lovely e-mail from a cousin I sent a card to a couple of weeks ago about the outrageous price a local restaurant is charging for Thanksgiving meal kits. How can I stop?

I'm thinking that going forth, I'll send a postcard to my aunt one week a month. My sister writes to her monthly, and I don't want to look bad. That would take care of a quarter of 2021's postcards right there.

So, yes, of course I'm going to keep going.

Posted by Gail Gauthier at 3:07 PM
Email ThisBlogThis!Share to TwitterShare to FacebookShare to Pinterest
Labels: Gail goes on and on, postcards

I like this idea! might even try it. Though my own extended family is very small, and my friends all on line...but it sound lovely.

Yes, if I knew the snail mail addresses of all my on-line connections, I'd have a lot more people to send postcards to.