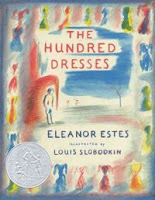 When I stumbled upon The Hundred Dresses by Eleanor Estes, I had never read anything by the author, though I'd certainly heard of her. She wrote three Newbery Honor books and won the medal for a fourth. So I borrowed the ebook and filled my reading gap.

The Hundred Dresses was published in 1944, and it's interesting on a couple of levels.

Stylistically, it is very elegantly written. It is more sophisticated in presentation than we see in middle grade books these days. And, yet, it also has a lot of illustrations by Louis Slobodkin. (Turns out I admired that Slobodkin site back in 2007.)  This gives the impression that The Hundred Dresses is for even younger readers. However, that may have been common in children's books of that era. The Hundred Dresses is also written in the third person, something that's not very popular with publishers now. It sometimes is written from a point-of-view character, Maddie, who who is more of an observer than an actor in the story, and sometimes the narrator is more classically omniscient. I don't think that kind of switching would go over today.

This book is about a couple of school girls who humiliate a third one, a child of poor Polish immigrants who has to wear the same dress to school every day. They "have some fun with her." The main instigator is a girl named Peg, who would be perceived today as a head mean girl. That sometimes point-of-view character, Maddie, is her companion, complicit in her silence.

At a couple of points it seems clear that neither the omniscient narrator nor Maddie consider Peg to be a bully. In her era, she may have been considered just incredibly shallow and thoughtlessly cruel. But Peg would be considered a bully today. Reading how she behaves to her victim, Wanda, and how Wanda just takes it and takes it and takes it was disturbing to this adult reader who is aware of how those who are bullied have broken over the last couple of decades.

The ending was also disturbing. Wanda forgives Peg and Maddie. I'm not saying forgiveness is a bad thing. But those two little WASP girls didn't have to do a damn thing to redeem themselves, so they could feel better.  Wanda does it all.

I've seen a few descriptions of this book that indicate that it's about Wanda Petronski, the Polish girl victimized by Peg and Maddie. I don't feel it is. I think it's about Maddie, the girl who stood to one side, did nothing to stop the bullying, and was a decent enough human being to feel bad about it. It is her thoughts we are privy to and we see what she sees. Additionally, the book is said to have been inspired by an incident in Estes own life, when she was in a Maddie position and was never able to apologize to the girl she didn't help at the time.

I think Maddie as the central figure makes The Hundred Dresses a far more interesting book than it would be if it really were about Wanda. We have lots of victim books. We have far fewer about the other people in those situations.

This would be an excellent classroom or family read-aloud.

*I originally published the title as "A Sixty-Four-Year-Old Children's Book."

I haven't read this in quite a while, but I remember it as being more about Maddie and her regrets. I should take a look at this again, if only to see if the prebind copy in my library is starting to pong a bit! That's for an interesting discussion of it.

A good companion book to this is Jacquelyn Woodson's EACH KINDNESS about a young girl's lost opportunity to be a friend to a new girl before she moves away.