The last couple of weeks I've been going through some torturous planning for a project I'm seven chapters into. I've

It's been slow going, folks. 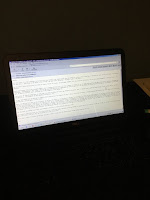 However, just now I whipped off an e-mail to someone I went to high school with that went on and on. I mean I could not stop writing. Told her what I wanted to tell her, elaborated on it, then told her some other unrelated stuff.

Every day should be like this. I should be stunned by the writing I'm doing. Absolutely stunned.

Posted by Gail Gauthier at 3:49 PM
Email ThisBlogThis!Share to TwitterShare to FacebookShare to Pinterest