Oui, aujourd'hui c'est International Francophonie Day, celebrating the French language. It does not appear to be a major event here in the U.S.. Ne vous inquietez pas! You can observe the day here at Original Content. 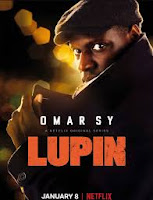 Perhaps you are familiar with the French TV show Lupin, which is available in this country on Netflix in its original language with English subtitles? It's about a contemporary gentleman thief who was inspired to go into the business because as a child he was a fan of the early twentieth century books by Maurice Leblanc about  Arsene Lupin, a gentleman thief. So the main character in the TV show isn't actually Lupin, he is inspired by Lupin. He is Lupin-like.

My guess is that the character Lupin is so well known in France that using his name in the title of a TV show is meaningful for French viewers. Like using the name Sherlock (to whom I've seen him compared) in an English language show is meaningful to English and American viewers. I am patiently waiting for the second series to drop on Netflix. The first one ended on a major cliff-hanger.

Snippets of Paris, a site about life in France, lists the Arsene Lupin series as one of the 12 Best French Children's Books to learn French. It describes them as being for school age children with an intermediate French vocabulary. I found French editions of the books (Not at the link included at Snippets of Paris, though. Those books are in English.), and a quick look into one of them indicates that my French is not on the level of a school age child with an intermediate French vocabulary. Not even close. I will have to stick to watching the series in French while reading the subtitles and patting myself on the back whenever I recognize something.

Also, I suspect the Arsene Lupin books aren't actually children's books, but adult books that children read, similar to the Sherlock Holmes books. But since I haven't read them, that's just a guess.

A Break From Angst To Celebrate La Francophine Day