Today in honor of La Francophonie Day, this Friday the 20th, I am featuring

Quebec children's illustrator Manon Gauthier.  She is described by Canadian publisher Pajama Press as working in "many media, including gouache, pencils, and paper collage." 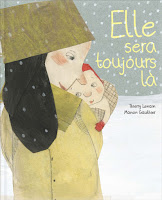 She is a self-taught illustrator who has been nominated for the Governor General’s Literary Award for illustration four times and has had work  selected for the illustrators' exhibition at the Bologna Children’s Book Fair.

I like Gauthier's style, though I'm not knowledgeable enough about art to describe it, and, of course, she has a very cool name.

We have no connection. There are many Gauthiers in the French-speaking and Franco-American worlds.
Posted by Gail Gauthier at 11:14 AM
Email ThisBlogThis!Share to TwitterShare to FacebookShare to Pinterest
Labels: Francophonie Day, French books, illustrators