Over the coming weeks I will be covering book launches within the children's literature world and other childlit-related events that are cancelled due to the coronavirus outbreak in this country. You can help out these authors by spreading the word about their new books, following them on social media, recommending their books to your libraries, and, of course, purchasing them when you can. I'm collecting this information on a catch-as-catch-can basis. Many more authors and illustrators will be affected who you won't see here.

Today's author info relates to events that appeared on the March Connecticut Children's Literature Calendar and includes nonbook launch appearances. These are followed by some Massachusetts news. 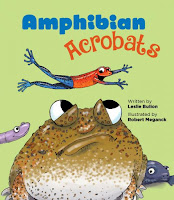 R. J. Julia Bookseller's (Madison, Ct.) Event Calendar has been cleared until the end of the month. Leslie Bulion was to have appeared there on Saturday, March 21. Her March 22 Byrd's Books (Bethel, Ct.) appearance has been rescheduled to June 5, 5:30 to 7:30
Both dates supported her book, Amphibian Acrobats.

Amphibian Acrobats, published by Peachtree Publishing Company and illustrated by Robert Meganck, is a nonfiction book dealing with amphibians around the world.

Leslie Bulion is the author of six other books for children, which have been named to lists sponsored by such organizations as the NCTE, Bank Street College, and Book Sense.

A Galaxy of Sea Stars

The Barnes and Noble in West Hartford, Ct. has no events listed for the rest of the month. Jeanne Zulick Ferruolo was to have appeared there on Saturday, March 21 in support of her latest book, A Galaxy of Sea Stars.

A Galaxy of Sea Stars, published by Farrar, Straus and Giroux,  involves an eleven-year-old American girl whose family sponsors a family from Afghanistan that includes a girl her own age.

Jeanne Zulick Ferruolo is also the author of Ruby in the Sky, which won a number of awards before publication.

Welcoming Elijah: A Passover Tale With A Tail


Leslea Newman's March 29 appearance at the River Bend Bookshop in Glastonbury has been cancelled. She was to have read her new book, Welcoming Elijah: A Passover Tale With A Tail. 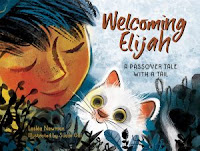 Welcoming Elijah, published in January by Charlesbridge and illustrated by Susan Gal, is the story of a young boy celebrating Passover with his family while a kitten observes from outside the house.

Newman is the author of numerous books that have won multiple awards. More importantly, she was at the University of Vermont around the same time I was. Seriously, we overlapped on campus two years. Additionally, she was at the Bread Loaf Writers Conference as a participant the year after I finished my three summers there as the pastry assistant in the kitchen! This is amazing! (I feel that I may have noted this info sometime over the years in a post about Newman, though I can't find it. Well, if I have told people about this before, all I can say is that it is well worth repeating.)


The Public Library of New London, Ct. is closed as of last Friday, March 13. Katie L. Carroll and Patrick Scalisi were to have appeared at the library's Local Author Fest on Sat., March 28.


The Storytellers' Cottage in Simsbury, Ct.  is closed for the rest of the month. Joyce Lapin was to have appeared there on March 21st.

The New England Society of Children's Book Writers and Illustrators spring conference on May 1   through May 3 has been cancelled.

The New England SCBWI art show, Art From the Heart, at the Wedeman Gallery, Lasell College, from May 8-30, has been cancelled.
Posted by Gail Gauthier at 1:22 PM
Email ThisBlogThis!Share to TwitterShare to FacebookShare to Pinterest
Labels: #CCC Conoravirus Cancellations in Childlit, middle grade fiction, NESCBWI, nonfiction, Picture books