Yesterday afternoon, the news that author and illustrator Tomie dePaola had died at the age of 85 after falling earlier in the week quickly took over my Facebook page. I know an impressive number of people who had their picture taken with dePaola and/or have a Tomie story.

Tomie dePaola was born in Meriden, Connecticut and maintained connections with that city and this state. Beginning in 2001 he wrote a series of seven autobiographical books about growing up at 26 Fairmount Avenue in Meriden immediately before and during World War II. In 2011 the Meriden Public Library renamed its children's wing for him, and in 2018 it had to turn people away when he made an appearance there. 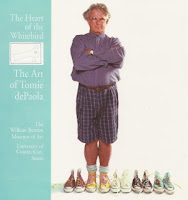 In 1999 dePaola donated professional materials to the Northeast Children's Literature Collection at The University of Connecticut. The University celebrated with a day-long symposium-type event. It was probably for educators. Around that time, I managed to attend a number of teacher literary events at UConn, because I had somehow gotten onto a teacher mailing list through a parent/teacher reading group I took part in at my sons' high school. So, yes, I crashed the Tomie party. That fall the William Benton Museum on UConn's Storrs campus also ran an exhibit of his work, The Heart of the Whitebird: The Art of Tomie dePaola. In October of that year, UConn awarded dePaola an honorary doctorate, one of nine he received.

And, finally, dePaola frequently was a featured author/illustrator at the Connecticut Children's Book Fair, most recently in 2018. I saw him signing there one year. The Fair had placed him on the far wall of the ballroom. The line of people waiting to speak to him went through the room, almost to the door. All the other writers signing just sat there and watched.

There was no Connecticut Children's Book Fair last year, and, personally, I have my doubts about whether it will come back, even if the U.S. is back to some kind of normal this fall. If it does, it will probably be a very long time before before the Fair finds as big a draw as Tomie dePaola willing to come out to a remote state university campus to support it.

The Connecticut children's literature world will surely miss his presence.

Edited to Add: Billie M. Levy interviews Tomie dePaola regarding the UConn event in 1999 held in honor of his donation of his archives to the University.

Posted by Gail Gauthier at 9:06 AM
Email ThisBlogThis!Share to TwitterShare to FacebookShare to Pinterest
Labels: Tomie dePaola