Over the coming month (or more) I will be covering book launches within the children's literature world and other childlit-related events that are cancelled due to the coronavirus outbreak in this country. You can help out these authors by spreading the word about their new books, following them on social media, recommending their books to your libraries, and, of course, purchasing them when you can.

KidLitCon is described as a Cybils Award Event, and is connected to the same childlit blogging community. My recollection is that it was originally specifically about blogging and bloggers, though now it is an "...annual gathering of people who care about, and/or blog (or Tweet or Instagram or Facebook or make Videos) about children’s and young adult books..." It involves a wider group these days.

Check out the bloggers and authors who were scheduled to attend. 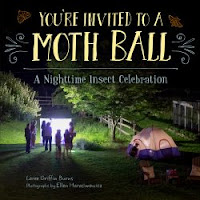 You're Invited To A Moth Ball


You're Invited to a Moth Ball by Loree Griffin Burns was supposed to launch at the National Science Teaching Association conference in Boston in April. The conference has been cancelled.
Burns said yesterday on Facebook that other spring launch events are up in the air.

You're Invited to a Moth Ball, illustrated by Ellen Harasimowicz and published by Charlesbridge, describes how child readers can observe night time insects at their own homes.

Loree Griffin Burns is the author of numerous nonfiction books for children, some of which have been named ALA Notable Books, Boston Globe-Horn Book Honor Books, and have won IRA Children's Book and Green Earth Book awards. 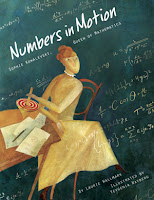 The book launch for Numbers in Motion: Sophie Kowalevski, Mathematician by Laurie Wallmark, at The Book Garden in Frenchtown, New Jersey on March 15 (this Sunday), has been cancelled.

Numbers in Motion, illustrated by Yevgenia Nayberg and published by Creston Books, deals with Sophie Kowalevski, a nineteenth century Russian mathematician, who was the first woman to receive a doctorate in mathematics that required original research and to hold a university chair in mathematics. (Hmm. A women's history month title, perhaps?)

Laurie Wallmark is the author of three other picture book biographies on women in technology, one of which was named Outstanding Science Trade Book and Cook Prize Honor Book.

Laurie was also scheduled to appear at the National Science Teaching Association conference next month.

I have at least two more cancellations to cover, and I suspect I'll be hearing about more.
Posted by Gail Gauthier at 2:01 PM
Email ThisBlogThis!Share to TwitterShare to FacebookShare to Pinterest
Labels: #CCC, #CCC Conoravirus Cancellations in Childlit, #KidLitCon2020, nonfiction, picture book biography, Picture books