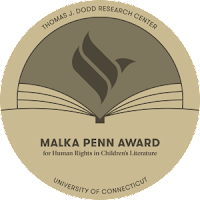 The White Rose by Kip Wilson has won the 2019 Malka Penn Award for Human Rights in Children's Literature.  This is the third year for the award, which was  established in part by writer Michele Palmer who has written children's books under the name Malka Penn. The award also is connected with the Thomas J. Dodd Research Center at the University of Connecticut.


The awards ceremony is scheduled for April 23 at the Thomas Dodd Research Center on the Storrs campus of the University of Connecticut.