Eighteen Years And What Do You Get? 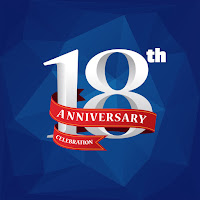 I thought Original Content celebrated its eighteenth anniversary today, but in reality it was March 6th. How did I bungle that? I didn't even do a post on March 6th of this year.*

Fortunately, I hadn't planned to do anything beyond starting to tweet links to posts from the archive again, something I was doing last year and then sort of forgot about. As you can see, I'm not good at pulling off special events, which explains why I'm always complaining here about what an ordeal Christmas is.

What's Happened Over The Course Of Eighteen Years?


Because I started dipping into my past last year, I am aware of some changes that have occurred over the eighteen years I've been blogging:

Here's a link to my very first blog post, entitled Not Another Self-involved Weblog? (That's another change. Nobody says "weblog," anymore.) If you'd like to follow me on Twitter, (@gail_gauthier), I'll be posting links to the past there regularly. Or maybe not regularly, but sometimes. And I think I might start adding an anniversary link to the bottom of my 2020 posts. A "What was I blogging about on this day in ______?" thing. Yeah, that would be interesting. For me.

And this is why I'm so bad at planning special events. Ideas come to me way too late.

*Update: I know how this happened! I have a work planning calendar (Ha! For what good that does me!), and I wrote "Blog turns 18 years old" on the March 18 date. 18 and 18. A logical mistake, though still inept. And may have been due to rushing.

Posted by Gail Gauthier at 8:34 AM
Email ThisBlogThis!Share to TwitterShare to FacebookShare to Pinterest
Labels: 18th anniversary, blogging

I agree that engagement is way, way down from when we started blogging (and you were very early). But I wanted to stay that I'm still reading and glad that you're here. Happy 18 years!

I am so impressed! This is a fantastic accomplishment. My blog is your slightly younger sister, coming in at just 14.

Jen, I do appreciate it you sticking with me.

Test, I am planning to make cupcakes today, because I have eggs to use up before Friday. Waste nothing!

Happy blog birthday to you! you were one of the well-established ones I was reading when i started my own, 13 years ago. Those were heady times!

They were heady times, Charlotte. I'm glad I got to be a part of that.