Over the coming month (or more) I will be covering book launches within the children's literature world and other childlit-related events that are cancelled due to the coronavirus outbreak in this country. You can help out these authors by spreading the word about their new books, following them on social media, recommending their books to your libraries, and, of course, purchasing them when you can.

I'm collecting this information on a catch-as-catch-can basis. Many more authors and illustrators will be affected who you won't see here.

A Whale Of A Mistake 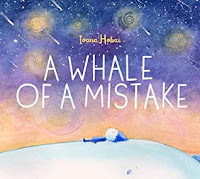 A few days ago, Ioana Hobai announced on Twitter that all her events for A Whale of a Mistake have been cancelled.

A Whale of a Mistake, illustrated by the author and published by Page Street Kids, is about a girl dealing with a big mistake.

Ioanna Hobai has published two other picture books since 2018, one as an illustrator and one as an author and illustrator. She studied art in her native Bucharest.

The Fabled Life Of Aesop

Ian Lendler also announced on Twitter last week that he's had to cancel events for the launch of The Fabled Life of Aesop: The Extraordinary Journey and Collected Tales of the World's Greatest Storyteller.

The Fabled Life of Aesop, illustrated by Pamela Zagarenski (two-time Caldecott Honor winner, by the way) and published by Houghton Mifflin Harcourt, is both a picture book biography of Aesop and an anthology of his work.

Lendler is the author of a number of children's books, as well as adult nonfiction. Interesting mini-fact: He grew up in Wallingford, Connecticut, which isn't that far from me. Not that close, either. Close enough that I may have driven through. Never knew him, though. Not that interesting a mini-fact. 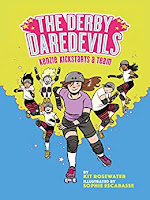 
On Wednesday, Kit Rosewater announced that the launch for The Derby Daredevils Book 1 at Book People in Austin, Texas has been cancelled.

The Derby Daredevils, illustrated by Sophie Escabasse and published by Amulet/Abrams, is about two girls trying to pull together a 5-girl roller derby team in one week.

The Hudson Children's Book Festival, scheduled for May 2 in Hudson, New York, has been cancelled. This year's Newbery winner, Jerry Craft, was to have been the featured author. The author/illustrator list included many NESCBWI colleagues. The Book Festival's 2021 date has already been set--May 1.

I read The Derby Daredevils, so will try to get the word out.