I Read It For The Bread

You know those books about women going to Europe on their own and having some kind of meaningful life improvement thing happen there? Yeah, I haven't read any of those, but I imagine All You Knead Is Love by Tanya Guerrero may be a middle grade version of those.

Twelve-year-old Alba is sent off to Barcelona from New York to live with her Spanish grandmother who she doesn't know well, because her well-to-do father in America is physically abusive. The abuse primarily involves her mother, and mom gets Alba out of this mess by sending her off to her own mother. Alba isn't crazy about this plan, and she's angry with both her parents--her father for being what he is and her mother for putting up with it. But Alba is won over by life in Barcelona, because her grandmother is a lovely woman, there's a male mild romantic interest, a girl best friend, and an old friend of Mom's who runs a bakery specializing in bread.

Some Basics About The Book

I don't think I've read many middle grade books that begin with an escape from abuse or that include mom being on the receiving end to this extent. I found that interesting. I would have liked more of that. I wanted to see evil Dad, see mom standing up to him, and see Alba respond to that situation. There was also an issue with Alba's appearance--she likes to wear her hair very short and wear boyish clothes. This ticks Dad off. I thought we were going to see some kind of gender situation here, but it never came to that.

I have never been that interested in Spain, but Guerrero makes Barcelona sound fantastic. The book isn't enough to get me onto a plane, but I certainly would watch a  movie or TV series set in Barcelona, or even Spain, after reading it.

And then there is the bread. I sought out this book because  the the word "knead" is in the title and there are loaves of bread on the cover.

I Was The Bread Person 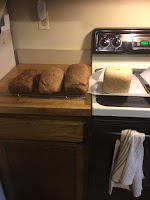 I have been baking bread, and bread-like things, since I was a teenager. All this stuff about yeast shortages during the pandemic, because people who had never baked bread were taking it up while they were stuck at home? That set me off. Those Johnny-come-latelies were taking my yeast. And I'm somebody who buys it by the bottle and usually am one bottle ahead. 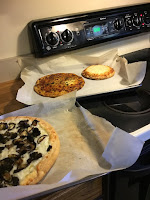 Back in the day, I made bread in the shape of Christmas trees, braids with white, whole wheat, and something else strands, braids stuffed with pastes made of walnuts or almonds, Easter braids with colored eggs. Sadly, I do not have pictorial evidence of any of that. You'll have to take my word for it. I cut back on the fancy stuff, because I'm surrounded by Philistines who prefer brown-and-serve rolls, which I will not have in my house. I'm not even sure what they are. 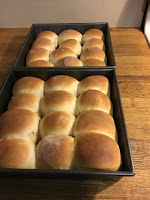 A friend up the street once said, "Whenever it rains, I know that Joan is making cookies, and Gail is making bread." I was famous for bread, people. Famous, I tell you.

So you can see why I had to read All You Knead Is Love.

Sadly, the bread making in All You Knead Is Love is way, way beyond my clearance level. However, I loved that the bakery in the book expanded to making gluten-free breads, since I'm doing that, too, now. After several years, I'm just tinkering with a recipe I really like. I have no pictures of that, either.

All You Knead Is Love is more than a travel and food book, but it should be a nice introduction to those types of reads.