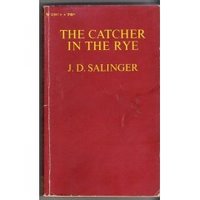 I just finished reading King Dork, a very well-received book by Frank Portman. As Lewis Black might say, I'm having trouble wrapping my mind around this and feel as if my head might explode.

Tom, or Moe, or Chi Mo, the King Dork of King Dork is definitely a Holden Caulfield-type character though he claims to hate Catcher in the Rye by...well, you know. Tom/Holden is a type of character who turns up a lot in literature as well as in teen movies and television shows.

Why are so many people attracted to stories of sad, loner, outcast adolescents? My theory is that a big percentage of the adult population is carrying around baggage about their sad, loner, outcast adolescence. Books like King Dork validate their experience, providing "...a grand triumph of the underdog, a tribute to the noble spirit of the alienated and abused." (King Dork)

My question is: How many times do I need to be validated?

Like many YA books, King Dork is written in the first person. One of the pitfalls of using the first person is that it's easy to fall into a telling rather than showing mode. Lots of dramatic tension is undermined in Dork because the King is constantly telling us about things that happened rather than showing us a scene. Tom takes to carrying copies of Soldier of Fortune and wearing an army coat to put off his tormentors. I thought this was a very clever idea, myself. But having the character tell me about it was very much like my telling you about it now. The drama, humor, whatever of the situation just wasn't there.

The first-person narrator misses the climax of the book altogether. Storylines conclude without him and people tell him about what happened after the fact, giving the story a Sleeping Beauty aspect. (My original post discussed this aspect of the book more fully, but I decided I was giving away too much of the story and changed this paragraph for the benefit of people who haven't yet read the book.) The climax is all about talk.

Except for talking, Tom, himself, doesn't actually do a lot in the story. Even his band is primarily talk. Whatever changes come about in his character--and he does seem somewhat happier at the end of the book--are the result of things that are told to him or done to him. For instance, the sexual acts performed upon him by two different girls. I don't want to give too much away, but they are acts that require nothing of him, he does nothing for those girls. (Perhaps there's some kind of male fantasy thing going on here.)

While I was reading King Dork, I kept noticing references that seemed too dated for today's teen readers to get: Virginia Slims commercials, Jimmy Buffet, Carrie. And Tom is fan of 70s and 80s music, so there are lots of mentions of older groups. Evidently either the author or an editor had the same concern because the book includes a glossary a la Georgia Nicolson. Very, very Georgia Nicolson.

Tom is witty. He reads some deep books. He can make readers who identify with his suffering feel good about themselves.

Otherwise, I'm going to have to remain the lone outcast who doesn't get this book.

He didn't make that sound like a good thing.

NOTE: Tom talks about Brighton Rock by Graham Greene. I read it when I was in college. Don't remember caring much for that, either.
Posted by Gail Gauthier at 1:46 PM
Email ThisBlogThis!Share to TwitterShare to FacebookShare to Pinterest

While I didn't dislike the book, per se, I also didn't see what the big deal was. Wasn't bad, wasn't great.

My biggest problem with the book is related to your telling-not-showing issue: King Dork, like too many other books including Harry Potter, needs a final chapter or so just to explain some of things that happened previously. A long chapter, with explanation piled on explanation. Snoozeville.

I did like the dialogue. I particularly like, when Tom was confused by something, the line, "I said, '?'" That's so much better than "I made a puzzled expression." I wish I'd thought of that myself.

I think the outcast idea rings so deeply in most people because most people do feel like outcasts in their middle school and high school days - even if they weren't. There's such a universal feeling of insecurity of those years where we are so sure we are all dorks.

And let's make it clear here and now, that I wasn't a dork. Or at least I don't think I was.

Anyway, it's well within your rights not to like King Dork.

Haven't read King Dork, but I have read Brighton Rock. Hated it.

See, I don't think King Dork is written for YAs. The book has received a warm reception from "grown-ups" for just the reasons you outlined, in my opinion. Now that we are all "mature and secure" (ha!) grown-ups we feel a sort of nostalgia for those painful teen years and this book must have struck a chord with some of us (alas, it did not with me.)

I don't know ANY kids who have read Catcher in the Rye (except my own daughter who read it because it was refered to in one of the anime series she likes...and because she is a fearless reader)so the references to the book are totally lost on them.

I don't claim to have any exclusive or extraordinary insight into teens' reading interests -- but it was unusual that I could not think of a single student I would share the book with when I finished it.

I always thought that the reason there are so many loner adolescent protagonists is because there is a strong positive correlation between being a loner adolescent and growing up to be an author. A scholar of Anthony Trollope once told me that the reason Trollope could render in minute detail the workings of English "society" was that he was soundly rejected by it his entire life. So I have always assumed that, for example, the YA novels about the machinations of popular girls were not written by grown up popular girls, but by either a) their victims, or b) girls who were smarter than they were, and merely observed them from a distance.

I mean, I always assumed that the character in "The Hero of Ticonderoga" with whom you, Gail, identified was Tessy, not Peggy.
But, not being a writer myself, I imagine I could be totally wrong.

I don't know if statistically there is a correlation or causal relation between being a loner adolescent and becoming a writer, but, again, it's something we see a lot of in books and movies. Who thinks of the King of the Junior Prom as writing a novel someday? We seem to believe that suffering is necessary in order for people to become creative.

By the way, my husband associated me so closely with Tessy that he wanted me to change the ending so that she ended up in what he felt was a more positive situation.

And he didn't even know me when I was in sixth grade.