I Come To Praise Book Awards, Not Bury Them. I Promise.

I don't do a lot of announcing of traditional book award winners here because I have my doubts about whether there is any such thing as a best book. Each year there's a pool of really superior books in any particular field, and I wonder if one should be elevated above the rest. What do the awards mean? The criteria remain the same from year to year, but the judges change so those criteria aren't necessarily applied exactly the same way each year. On top of all that, some contests require an entry fee. The National Book Award, for instance, has a $125 entry fee. How many books will a publisher submit at $125 a pop? I learned this past year of a publisher that has a policy of not submitting books for awards with entry fees. (I wanted to ask if that included the National Book Award, but given the particular circumstances it might have been considered argumentative.) What if the best book of the year for a particular award was never even considered because it wasn't entered?

So, you see, I take the whole winning-book thing with a grain of salt.

However, I do like book awards that include a list of announced finalists because that means some of those books from that pool of superior books I was talking about earlier are brought to the public's attention. This is why I was so enthusiastic about the Cybils, by the way. While committee members creating the shortlist read nominated books, they could blog about them, promoting many titles. 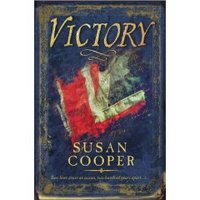 This is all the lead in for how I came to finally read a book by Susan Cooper. You know, The Dark Is Rising Susan Cooper? Never read a word she'd written until her most recent book Victory was named a finalist for this year's Connecticut Book Award for Children's Author. I was writing a short overview of the finalists for a Connecticut publication, so I finally had to read a Cooper book.

The basic story behind Victory will be familiar to many adult readers. A contemporary person feels a strong personal connection to someone who lived long in the past. Cooper just does a great job with her version.

In this case, young Molly is an English girl who has moved to Connecticut with her mother who has married an American. This is no tale of a disfunctional family. Molly's stepfather is great. Her stepbrother is great. Her mother has a new baby who is great. Everyone loves Molly and wants the best for her. Nonetheless, she is suffering from the relocation. She just wants to go home.

She buys an old book on Lord Horatio Nelson who, evidently, to this day is a major hero/symbol in Billy Shakespeare country. And that is how she forms a connection with a boy who served on HMS Victory, Admiral Lord Nelson's flagship, the very one upon which he died during the Battle of Trafalgar.

These two children's stories are told in alternating chapters. Molly's is told in the present tense, which is nifty since it's taking place in the present. Sam's is told in the past, which is nifty for a similar reason. Molly's story is elegant. Sam's is richly detailed. I'm not much of an ocean-going sort, myself. When I visit Mystic Seaport (which plays a part in this book), those old boats seem like nothing so much as floating coffins to me. So little wonder I at first preferred Molly's story to Sam's as I read Victory. But about halfway through the book that changed. Cooper won me over, and I couldn't wait to get back to Sam.

As I was reading Victory, I wondered if it was a book for history geeks like myself who have either had our own experiences connecting with figures from the past or desperately want one. I don't think so.

If reading Victory makes you a bit of a Nelson groupy and you'd like to read a fine adult novel in which he plays a part, try Losing Nelson by Barry Unsworth.
Posted by Gail Gauthier at 6:36 PM
Email ThisBlogThis!Share to TwitterShare to FacebookShare to Pinterest
Labels: historical fiction--sort of

I'm not a history geek, and I'm especially not fond of war stories, but I loved this book. Both stories are really well done, and it certainly holds your interest.

Excellent. Sometimes I worry that certain books appeal to me simply because they hit upon some interest of mine.