Will It Find Its Audience? 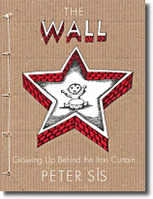 In an NPR interview with Peter Sis, Scott Simon never refers to Sis's book The Wall: Growing Up Behind the Iron Curtain as a picture book. Instead, he calls it an illustrated book. That could be a good term for books published in what we think of as picture book formats but with content most definitely not for the child readers we usually associate with picture books.

The Wall is a marvelous memoir of Sis's childhood in Cold War Czechoslovakia. Sounds riveting, doesn't it? The Cold War is a subject, I'm embarrassed to say, that has always left me...uh...cold. I always thought of those Eastern European countries under the Communist's heels as gray, colorless places, much like Sis's sophisticated, highly detailed illustrations. The Wall may have changed all that for me.

On one level Sis uses mature, cartoon-like illustrations with classic minimal picture book text to tell the story of his childhood and adolescence. In addition, though, he adds historical detail along the margins of those illustrated pages. On top of all that he has six big pages of journal entries going back to 1954. That's a lot of material.

Too much, of course, for your preschoolers and first grade students for whom picture books are usually written. This would be one rough read aloud. Too much, I'm guessing, for anyone under, say, fourth grade. It should grab the attention of much older readers, too. (For instance, the part rock played in these young peoples' lives should be of interest to a lot of teenagers; a lot of adults, for that matter.) The Wall would make a great reading list addition to a social studies curriculum.

But will the grown-ups who teach those classes be open to giving credit for reading an "illustrated book?" Yes, the book is good enough to read on your own. But how will young people of the right age to appreciate it find it? It was on the new picture book shelf in the kiddy area at my library. How much is it going to circulate in that age group?

I think this book would also make a great addition to an art program. Sis says at the end, "I find it difficult to explain my childhood; it's hard to put it into words, and since I have always drawn everything, I have tried to draw my life-" Does anyone else see an art project there?
Posted by Gail Gauthier at 7:16 PM
Email ThisBlogThis!Share to TwitterShare to FacebookShare to Pinterest
Labels: memoir, picture books for adults