Not As Much Fun As Hell 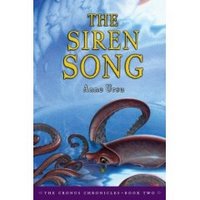 A few weeks ago, a couple of us at one of my listservs were saying that we thought Anne Ursu's The Shadow Thieves hadn't received the attention it deserved. The Shadow Thieves was the first in a trilogy called The Cronus Chronicles. The second book, The Siren Song, came out last year. I totally missed hearing about it until I found it on the new bookshelf at my local library.

The Siren Song continues the adventures of Charlotte Mielswetzski a few months after she gets back from Hell. Hades, actually, since The Cronus Chronicles is part of that sub-genre of fantasy that contends that mythological gods are the real thing, and it's Greek gods Charlotte keeps running into. In the first book, Charlotte and her cool British cousin Zee had to save humanity from a hellish plot in the underworld. This time around, the bad guy from book one is out for revenge against Charlotte.

The Siren Song seemed to have some plot problems to me. (I am very sympathetic to plot problems, since I struggle with them, myself.) I think I was nearly a third of the way into the book before the serious action began to kick in. Zee disappeared for a big chunk of the book. A new character was introduced but not until quite late in the show.

The Siren Song still had a lot of wit. It just didn't come together and work as well as The Shadow Thieves. Plus, it may have suffered a bit because there may not be as much at stake in a vengeance-against-one-person story as there is in a save-the-world story.

The end of this second book suggests the third one will involve "something that may affect the fate of us all." The mysterious Mr. Metos should be back. I suspect the new character I liked will be, too. And our bad guy most definitely has not been vanquished.

Book three should be coming out either this year or next. I will have to watch carefully for it.
Posted by Gail Gauthier at 6:27 PM
Email ThisBlogThis!Share to TwitterShare to FacebookShare to Pinterest
Labels: Reader response