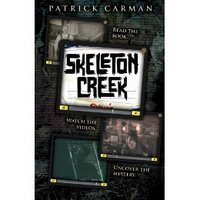 Skeleton Creek by Patrick Carman, which will be published this month by Scholastic, is described as a multimedia ghost story. The term "multiplatform" was used in a Publishers Weekly article. The idea is to mix both traditional text with video--the reader reads for a while, then is directed to a video on-line that continues the story for a few minutes, then goes back to the text, back to another video, etc.

It's like the hybrid novel/graphic novels I was seeing a couple of years ago, but the graphic novel portion has been replaced with video.

I wasn't wild about Skeleton Creek's basic story. (See A Year of Reading for a very positive response.) Though the text definitely has an eerie atmosphere and an interesting protagonist in the fearful Ryan, his portion of the novel is done as a diary. One of the reasons I'm not a fan of diary books is that it's very easy for the writing to fall into a "tell" mode, and that seems to be what happens a lot in Skeleton Creek. We're told that the town is weird. We're told that something odd is going on. But the only odd, weird things we see occur on the videos.

You really are getting both show and tell in Skeleton Creek.

The multimedea format, though, is intriguing. I found myself frustrated several times because I reached a portion of the book directing me to the Internet to check out the video while I was reading in a place where I couldn't do that. (I was reading in bed, okay? And while, believe it or not, I do have a laptop in my bedroom, it's not one of the three computers in our house with Internet access.) However, the book isn't all that long, so I imagine children engaged with the story and with time on their hands could just sit close to their Internet connection. And if this format were to catch on, in future years Internet access will probably be more...accessible...through cell phones and other techie devices. (Forgive my vagueness on this subject.)

What I find most interesting about Skeleton Creek is all the questions it raises and possibilities it opens up.

For one thing, in the Publisher's Weekly article, Patrick Carman says, "In the past, when technology has been included in one of my book projects, I’ve never felt like it was deeply connected to the story. A web-based add-on that has no meaningful connection to a book often feels hollow for readers, as if it’s been bolted on as a bonus rather than essential to the experience." And later he says he asked, "Was there a story that could be told in which the printed word and online videos could contribute equally?"

I think what he means is that the technology needs to be integral to the story. For this format to work, there has to be some legitimate reason for the video to exist. In Skeleton Creek, there is. Ryan's partner, Sarah, does with video what he does with his journals. I'm wondering, though, how many story lines can authors come up with in which that happens? I'm sure there are more, but will coming up with logical reasons for the video to exist limit the number of stories you can use this format with?

And once you add video, you can run into some problems you don't have to worry about with text alone. For instance, what if a reader doesn't like an actor in the videos? What's that going to do to the whole reading experience? What if a reader has committed to the character on the page and is disappointed when s/he turns up in a video? (For the record, when Ryan appeared I thought he was perfect.) The actors in the videos are going to have an impact on the readers. For instance, I liked the actor who played the ranger in Skeleton Creek. But I didn't think he played the ranger as particularly weird and creepy the way Sarah kept telling us he was. I felt he was more...annoyed. Not that I blamed him.

But if you can overcome those problems, you've got some interesting possibilites. Carman is interested in using technology to "enhance the appeal of the printed word to today’s young readers." Of course, that's important. But I'm thinking about the creation of a whole new genre and what could happen with it in the future. Why shouldn't this format make the leap to adult novels with far more video so that you can merge a dvd with a full-length book?

How many people do you think would look forward to spending a weekend with that type of novel?
Posted by Gail Gauthier at 6:36 PM
Email ThisBlogThis!Share to TwitterShare to FacebookShare to Pinterest
Labels: Reader response

Why would you have a printed book? Why not just read the text portions on the screen?

Hmmm. So you'd still have a "novel," it just wouldn't be on paper, just as you still have a "novel" when you're reading it on something like a Kindle. I think that could probably work in the future, particularly if traditional paper books go the way of the dinosaur.

Believe it or not, there is a Star Trek tie-in to this issue. Captain Picard was often seen reading a "real" book whereas everyone else "read" off of a computer screen or handheld device. Someone has even coined a phrase for people who want a real book rather than an ebook. It is called Picard's Syndrome. Google it for more info.

Never doubt Civilguy. Yes, indeed, if you google Picard Syndrome you'll find hits relating to people who prefer a traditional book over an ebook, just as Picard did.

Picard Syndrome should not be confused with Jean-Luc Picard Syndrome, which appears to describe managers who believe that all they have to do is say, "Make it so," to get something done. You'll find that by googling, too.