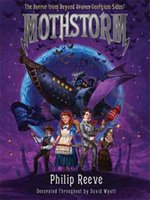 What better time then Mother's Day to discuss a book in which a pivotal figure is a go-to Mom who really can fix, if not everything, a whole lot?

Mothstream by Philip Reeve with illustrations by David Wyatt is the third in the Larklight series. This series is particularly notable, I think, because its third book is as good as its first. Reeve isn't running out of ideas or humor.

When I read Starcross, the second Larklight book, I wondered if kids would get the humor. (I know, I know. I'm always wondering about that.) I think that Mothstorm may actually be more accessible to young readers. If so, that may be because of all the focus on Mother.

In the Larklight series, Art and Myrtle's mother is some kind of immortal being who has created the life forms across our universe and lived for millions of years in various of her creations' bodies. She has now chosen to become a human woman, a wife, and a mother. She has done this in an alternative Victorian world in which the British Empire has extended into space by way of ships that look a whole lot like the ones used to maintain that empire in the world we know.

When Her Majesty's holdings are threatened by another immortal being very much like Mother but nowhere near as ladylike, her kids, Art and Myrtle, turn to dear old Mum for the wherewithall to once again save the day.

Mothstorm is very much a female-oriented book. You have a heroic mother/creator. You have an evil female antagonist who has enslaved a race of women warriors. You have the scrappy daughter of a missionary. You have a youngish (and inept) Queen Victoria. And you have Myrtle, that wonderful, walking stereotype of a nineteenth century British young lady who has a clever and extremely funny storyline this time around.

Art and Myrtle looking for Mother, hoping to save Mother, and relying on Mother gives this book something that kids can follow and want to pursue, whether or not they get every nineteenth century joke.

Mothstorm was published back in 2008. I'm not aware of its receiving the same kind of buzz the first book in the series did. I hope people aren't losing interest or simply not noticing another Larklight book.
Posted by Gail Gauthier at 7:21 PM
Email ThisBlogThis!Share to TwitterShare to FacebookShare to Pinterest
Labels: fantasy, Larklight, Reader response

Interesting. In book 2, Reeve had one of those hats take out the mother, leaving the kids on their own.

I didn't even know Mothstream was out, let alone that it's been out since 2008. This series isn't getting much talk or exposure. I like the books a lot--and do like the mother premise. I'll have to hunt for #3.

I remember that in book 2. She was out of commission for a while. She was out of commission for a while in this one, too. And I think she was missing at the beginning of the first one. This recurring motive is so interesting, because parents, particularly mothers, have to be moved out of the picture in kids' books in order for the child characters to have adventures. In this series the mother is some kind of super being, and she still is moved out for a while to leave the kids on their own. As it should be, of course.

Becky--If I remember correctly, the first book got quite a bit of attention. It's as if everyone has just moved on to other things. Though, while I love these books, I don't know how popular they actually are. They're not like Percy Jackson where there is no doubt.

I wish they got more attention - Mothstorm was hardly headlined at all when it came out this time last year. I didn't think the story was as strong as Books 1 and 2, and there were twisty plot devices that felt a little rushed and convenient towards the end but I love this series. I saw the mother figure very much in the same light as Kingsley's Mother Carey or George MacDonald's frequently female motherly 'creator' figures. My review's here - (post 33 of the Reeve thread) - http://palimpsest.org.uk/forum/showthread.php?t=1813&page=4

I don't think there will be a sequel to this third volume sadly (but there is talk of Larklight being filmed by Shekhar Kapur).