This Ought To Encourage The Young To Read Nonfiction 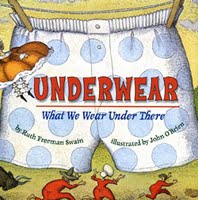 Underwear: What We Wear Under There by Ruth Freeman Swain, is a little heavy on text and probably a little too technical for the younger kids in its age range (6 to 10 according to the author's website). But it is very high interest. And while the illustrations are kind of on the traditional picture book side, they are good traditional picture book illustrations. I'd describe the writing style as clear, straight nonfiction. Overall, I think Underwear would be a nice book for helping kids make the transition from reading stories to reading fact.

A Gauthier family story about this book: I like to put books out next to the bed for houseguests. I put Underwear out for an elementary school teacher staying with us, who made the mistake of telling me afterwards that she enjoys picture books, meaning I'll have some waiting for her whenever she arrives. She shared the book with another houseguest, who took particular note of the following passage:

"The bottom half of a union suit got the name "long johns" from John L. Sullivan, an American bare-knuckles boxing champion of the 1880s and 1890s. Besides being a prizewinning boxer, he was known for fighting in his long underwear."

Well, it turns out that the second houseguest works in a financial-type office that shall remain nameless with a guy who will also remain nameless except for the fact that his middle initial is "L" and his last name is "Sullivan." And my houseguest had heard that his Something L. Sullivan was descended from the John L. Sullivan.

Text messages were sent. The passage in question was copied. And when the dust settled, it turned out that, yes, indeed, we have a family member who knows one of John L. Sullivan's descendants. I love it when this kind of thing happens.

Training Report: We're just not going to talk about this anymore.
Posted by Gail Gauthier at 6:48 PM
Email ThisBlogThis!Share to TwitterShare to FacebookShare to Pinterest
Labels: nonfiction, Picture books

The only thing that keeps me rolling out of bed and hitting the tread mill is thinking about the fact that my mother can no longer do that. Gives me a different perspective. I hope that you can find one to keep you going as well.