My Weekend With The Transcendentalists 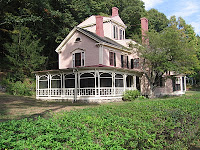 Concord, Massachusetts was everything I hoped it would be. Knowing, as I do, that not everyone shares my fascination with the Transcendentalists, I will skip over my trip to the home of Ralph Waldo Emerson (where we got a private tour because, oddly enough, we were the only ones there) and the Concord Museum (which is built on the site of Emerson's orchard--the guy appears to have owned a lot of property in Concord, including a nice chunk around Walden Pond) and expound, instead, on Wayside.

On top of that, Nathanial Hawthorne lived at Wayside after the Alcotts. Turns out that Nate wrote a children's book, because who doesn't?

Things become even more interesting, if that is possible, after Hawthorne's death. Evidently he had quite a following post-death (I'm hoping for that for myself), and when his home came up for sale it was purchased by one Daniel Lothrop. Lothrop and his wife were both Hawthorne fans.

They were also book people. Lothrop was a publisher whose company eventually (and after his death) became part of Lothrop, Lee & Shepard. His wife, Margaret, also known as Margaret Sidney was the author of...The Five Little Peppers and How They Grew! As well as a bunch of other Pepper books. And other things.

The people at The Wayside claim the Pepper books were the Harry Potters of the 1890's. I don't know if that's entirely accurate or a bit of wishful thinking on their part, but it does cause one to reflect, does it not? Because while I have read the first of the Pepper books, a whole lot of people have not. A hundred years from now will Harry have gone the way of the Peppers? We'll never know. 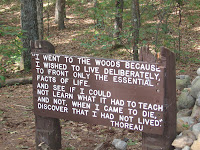 Oh, and while I'm on the subject of children's literature and Concord, we went to Walden Pond on Sunday, and while I can't say that Thoreau wrote any children's books (though very little surprises me in terms of kidlit authorship), I can tell you that D.B. Johnson was going to do an appearance there that afternoon. D.B. Johnson, of course, is the author and illustrator of the Henry books about a bear who is a great deal like Henry You Know Who.

We walked over five miles over the two days, also.

Transcendentalists, children's authors, and walking...it's hard to ask for anything more.