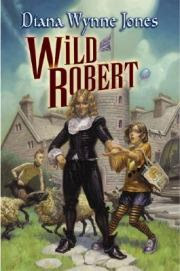 Wild Robert, which I stumbled upon at a library a few weeks ago, is one of Diana Wynne Jones books for younger readers. I have to say that I found it rather plodding, myself. It seems like an idea that could have become something much more sophisticated than what it ended up being.

However, there were a couple of aspects to the work that are interesting for someone who has read other of her books and has some superficial knowledge of a later fantasy bestseller.

First off, Wild Robert, which was originally published in 1989, provides another charming, childish, male character similiar to Howl in Howl's Moving Castle, which was published three years earlier, and even to Christopher Chant as he appears in some of the Chrestomanci books, which were published from the 1970s onward.

Secondly, in Charmed Life, originally published in 1977, Wynne Jones has figures in stained glass windows come to life and fight with one another. In Wild Robert, (published in 1989, remember) she has figures in paintings in a castle gallery do the same thing, in a much more elaborate scene.

The whole paintings-come-to-life thing was used regularly in the Harry Potter books, the first of which was published in 1997. Whether Rowling was influenced by Wynne Jones or simply hit upon the idea independently (which definitely happens), it's interesting to see two writers using the same detail in their work.
Posted by Gail Gauthier at 1:21 PM
Email ThisBlogThis!Share to TwitterShare to FacebookShare to Pinterest
Labels: 1989, Diana Wynne Jones, Harry Potter, Reader response