A Zenny Book For Writers 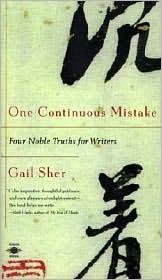 My big Retreat Week professional read this year was One Continuous Mistake: Four Noble Truths for Writers by Gail Sher. I've got to tell you, I just do not know what to make of this book. I can imagine myself quoting from it. I can imagine myself referring to it for bits I recall and want to check out again. But I can't say that I got tremendous amounts from it and don't know who I would necessarily recommend it to.

For one thing, I think you have to have some knowledge of Zen and writing to make heads or tails of this thing. For instance, it begins with an exercise called "Writing Zazen: Write on the same subject every day for two weeks. Revisiting the same subject day after day will force you to exhaust stale, inauthentic, spurious thought patterns and dare you to enter places of subtler more "fringe" knowing."

Now, I happen to know that zazen is meditation. I have even thought that freewriting or morning pages might serve as a form of meditation.  But how many people picking up this book know what zazen is? And there wasn't anything in this short exercise description that tells readers that Sher is suggesting meditation. I was so freaked out by that, that I looked up zazen to make sure that I did, indeed, know what it was.

There was another section called "Not Knowing," which seemed similar to what I learned of as beginner's mind. I actually do try to maintain the mind of a beginner. The concept, as I know of it, isn't all that difficult to understand. But Sher's "Not Knowing" is a little different. "For a writer, "not knowing" means giving over the part of you that knows to the writing. The writing tells you what it is." Okay, I had trouble with this section of the book because it did remind me of something I already knew about, and I'm trying to superimpose my knowing onto it. Which would mean that I'm not maintaining the mind of a beginner at all.

Wow. I'm not getting a lot out of that and blowing my mind while doing it.

The title One Continuous Mistake doesn't refer to the book's whole concept. It's just the title of one of these essays and refers to a Zen teacher's statement that "Zen practice is one continuous mistake." I think I would enjoy reading someone's meditation/writing talk about writing practice being one continuous mistake, but that wasn't what Sher's One Continuous Mistake essaylet was about. At least, I don't think it was.  The book's subtitle Four Noble Truths for Writers, was also the title of an essay. The title refers to the Four Noble Truths of Buddhism.

There was a great deal in this book that attracted me but then didn't go anywhere...for me. What does that mean? It could mean something. While reading One Continuous Mistake, I began to think that I'd like to be part of a writers' book group that read and discussed nothing but books about writing, which is something I'm quite certain I'd never considered before.

I didn't learn much from reading this book. I didn't take a lot from it that I can use in my writing or my life. I merely had an experience while reading it. And I probably shouldn't use the word "merely" when saying that.