I know the wait for me to discuss last Saturday's NESCBWI event New Media Day: Making Sense of the Evolving Digital Landscape has been long and painful. Well, folks, it is over. I am ready to begin.

The overall feeling of the day was that the move to digital reading isn't something to fight and fear. For one thing, it's here. For another, it can work for you. 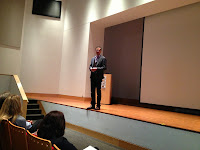 
James McQuivey tracks how digital disruptions affect traditional businesses, like publishing. McQuivey describes a world of consumers who are so disrupted in the way that they receive products that any company that doesn't conform to this new method of obtaining product will become irrelevant. Companies must, as he said, follow the consumer. For publishing, what we're describing as a digital disruption is the move to, or at least the inclusion of, eBooks. The more rapidly publishers can embrace digital publication, the sooner they'll be able to give the millions of digital consumers already in existence what they want.

This is a good thing. 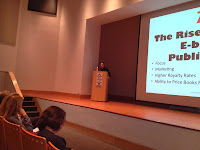 Rubin Pfeffer On Specifics Of Digital Publishing In The Children's Field


Rubin Pfeffer of East West Literary Agency spoke about specifics both digitally and with self-publishing, since many self-published writers go the digital route. According to Pfeffer: 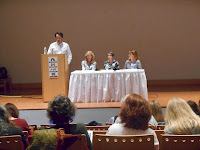 Begin, Boon, and Gauthier On Bringing Books Back To Life

Author-illustrators Mary Jane Begin, Emilie Boon, and I took part in a panel discussion moderated by NESCBWI Assistant Regional Advisor and author/editor/historian J. L. Bell. We got even more specific on the subject of digital publishing by answering questions about how we republished out-of-print work as eBooks. We all covered how we determined which of our books to take digital, where we went for technical assistance, and the general difficulties we experienced.

Both Mary Jane and Emilie used eBook publishers for their work, which, since they are illustrators, would have been heavy with artwork. Hearing this coming so soon after hearing Rubin Pfeffer's presentation, which included a list of independent eBook publishers and a description of services they offer, made me decide to refer to my eBook edition of Saving the Planet & Stuff as an artisan book, because my computer guy and I did it ourselves, not realizing until we were well into the project that we had any other option.

When we got to the point of discussing sales, my co-panelists and I had to be the bearers of the most difficult news of the day. We were in agreement that sales have been modest to dreadful. And we were also in agreement as to why that was the case--searchability, or, the term I prefer, discoverability. In a literary world in which nearly 800,000 books are published a year, it's extremely difficult for any one book to be noticed. There's pretty much a pile on and most titles will be buried.

We managed to bring things back up, though, by pointing out that that sales situation could change. Any one of us on the panel could publish something in the future that would make our back list more valuable, and then our eBooks will be available because they don't go out of print. In addition, self-publishing is an exciting, artistic project. Even though it was Mary Jane who said that, not me, I agree that the two years of publishing and marketing my eBook have been a mental kick. 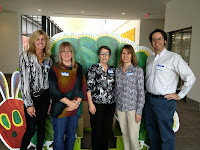 Our Conclusion Is Still To Come


The day ended with an interview with author-illustrator Ruth Sanderson. I'll be giving that its own post later this week.

Thanks to Facebook friend Hazel Mitchell for the panel picture. The final group photo was taken by Joanie Druris of the NESCBWI.

I don't see e books ever being a success in my school library. At some point, I'll be forced to spend thousands of dollars on them, and within five years that platforms will have changed so drastically that they will be useless. Also, for middle school students, seeing a physical book gives them so many clues about what their reading experience will be. E Book catalog searches need to get much better before I find them useful for myself-- I use the Ohio E Book Project, and browsing it is time consuming!

Wow. You should have been at this event.

When we discussed eBooks being in print forever and available should the back list become more desirable, I did bring up--for just an instant--that the platform could become obsolete and John agreed that it would have to be updated. But that's a whole other digital disruption that no one has dealt with, or probably considered, because it hasn't happened yet.