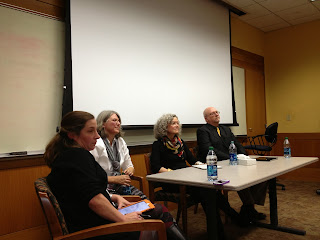 I went out last night to a UConn panel discussion, Gendered Publishing: The State of the Profession for Women Writers and Illustrators of Children's Literature. I have no idea who actually sponsored it, but Susannah Richards, a professor at Eastern Connecticut State University, member of the 2013 Newbery Award Committee, and a children's book activist, did a fine job as moderator. The panelists clearly had specific instructions and I sooooo like an event that stays within its time frame.


Lisa Rowe Fraustino, a children's book author and another professor at Eastern, spoke about her experience coming up through the academic world as a woman studying children's literature and writing. She mentioned at one point that the study of English education (vs. English literature) was not considered hefty in the past, a reference to that fact that children's literature was, and sometimes still is, taught as part of an education program rather than as part of a straight literature program. She also said that the people who had helped her as a writer were women.

Rowe Fraustino pointed out that the bulk of the students in her children's literature classes are women. The young people in the audience who would pursue children's writing would find that their teachers are women, their conference and workshop instructors would be women, the members of their critique groups would be women.

During Rowe Fraustino's talk I felt my dormant interest in graduate school stirring. It's gone now, but it was there for just a moment last night.


Interesting factoid about author/illustrator Barbara McClintock, who spoke about women illustrators: Long, long ago, I lived for a year in a tiny town next to the tiny town she lives in now. So we are neighbors in a Lake House sort of way.

McClintock talked about the 22% of Caldecott winners who have been women in spite of the fact that they dominate the profession. Women in other professions find themselves in similar situations in which they are up against a male world. The difference is that in professions like medicine, law, engineering, and tech fields, traditionally they have been male worlds. Children's illustration has not.

One striking comment McClintock quoted involved someone's perception that male illustrators are more serious about their work because they support families while women work as a hobby. I loved this, finding it delightfully retro. How, say, 1959! This is what used to be known as the pin money theory--women were wives who were supported by their husbands and only worked for "pin money," for trivial sums for nonessential items. This was considered a legitimate reason to pay them less. In my women's history class in college, we learned that the pin money theory was disproved by President's Commission on the Status of Women in 1963. But, of course, not everyone took that class.

Now, my legions of followers are aware that I don't get highly excited about awards. I might be expected to feel that all this concern about who gets them is petty. But here's the thing. Awards are about money. Earnings from the Caldecott Medal come in a number of ways. Straight sales, of course, but according to McClintock, Medal winners can expect to get more support from publishers for their future work as well as invitations to take part in events. The odds are against women getting access to these benefits. Why?

I knew before I left my house last night that children's publishing is a woman's domain yet the minority of men in the field get the bulk of awards. McClintock's talk, though, made this known situation more interesting than I expected it to be.


The third speaker on the panel discussed women working in graphic novels. This was new information to me, and I'm going to give it a post of its own tomorrow.

Posted by Gail Gauthier at 10:04 PM
Email ThisBlogThis!Share to TwitterShare to FacebookShare to Pinterest

Thanks for the recap, Gail!

Yes, I, too knew what you knew, but it does sound as if Barbara McClintock made it more interesting. And you did, too. Your 1959 and pin money comment made me smile albeit in a cringing, kind of excruciating, will-nothing-ever-change way. Thank you for the report!

This is fascinating! Many of my favorite writers as a child were women so I'm not too surprised by the trends.

Great information, thanks for sharing!

"One striking comment McClintock quoted involved someone's perception that male illustrators are more serious about their work because they support families while women work as a hobby."

*clears throat*
Just had to get that out of my system.
"Delightfully 1959" is such a gracious way to put it.

I would say that it's hard not to laugh at such a backward attitude, but that would be unkind. Actually, it's sad to live in the past like that. Difficult to see how someone like that manages in today's business world.