Okay, so get this. We were in Bennington, Vermont this past weekend. The North Bennington section of Bennington is where Shirley Jackson lived with her husband and children. Saturday night, after dinner, we did a Shirley Tour. I used information from these readings to plan it. I can't be certain of that info's accuracy, but it provided me with an incredible hour.

Let's start with the house the Jackson family lived in. This turned out to be pretty easy to find because some of those other sites I mentioned gave her street name and included pictures of the house. I'm not going to name the street for the sake of the people who live there now. I am showing my gratitude, because no one called the police on me while I was there taking the pictures I'm showing you. 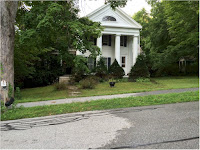 We hadn't been on the street long, when I started shouting, "That's it! That'sitthat'sitthat'sit!" My husband's immediate response was, "Perhaps I should drive." 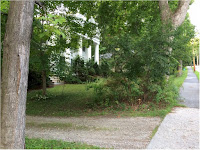 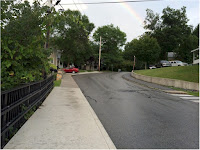 What I'm showing you now is the street leading up the hill to the Jackson house. I've read that Shirley was pushing a stroller up this street when she got the idea for The Lottery. Needless to say, I walked up it, too. 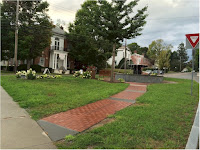 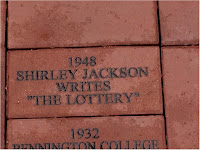 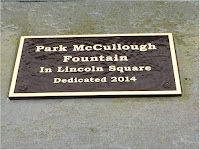 I'd read that I shouldn't expect to see any remembrance of Shirley in the Bennington area. However, Lincoln Square has an array of commemorative bricks, and there's one there for Shirley and The Lottery. 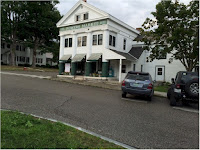 Finally, I read just last week that Shirley did her grocery shopping at Powers Market. Yowsa! It is still there! Talk about nerve! Not only did I have my picture taken in front of it (again, I did not flatter the store), I looked in the windows. (It was closed.) The interior looks remarkably like the interior of a store at a crossroads in Whiting, Vermont when I was a girl. We only went in for things like ice cream and bread, but I sort of shopped at a store like the one where Shirley shopped!

Powers Market is across from Lincoln Square, and they are both at the foot of that hill Shirley walked up with her stroller while she came up with The Lottery. It makes for a tight little loop, down to the store and back. I wonder how often she made it. A website about the town of North Bennington includes this line: "...her biographer, Judy Oppenheimer, describes a strained relationship between Shirley Jackson and the villagers of North Bennington." I've read that sort of thing frequently over the last few years. And now I can think about Shirley walking down that hill and back with a small child, probably over and over and over again.

Posted by Gail Gauthier at 11:29 AM
Email ThisBlogThis!Share to TwitterShare to FacebookShare to Pinterest
Labels: Shirley Jackson, Travels With Gail

So the bad feelings were a more town vs. gown thing than a Grace Metalious vs Gilmanton thing?

Rom what I've heard, maybe that. It sounds as if Jackson's writing was a lot more subtle than Metalious's.

Thanks for bringing this up. I had to look up the references. I have barely any memory of "Peyton Place."