Time Management Tuesday: Managing The Beast That Is Twitter With Tweetdeck, Part 1

This past Fourth of July, my nephew, who is part of a group blog and a Twitter user, told me about Tweetdeck. What interested me was that in addition to using it to schedule tweets, he said he used it to check out interests/hashtags and find new people to follow. Following others is a way to increase your own followers. I thought, Who doesn't want more followers? So I decided to look into it.

It took a while to get the hang of it, but I'm loving Tweetdeck now. It is a time saver. Additonally, I can save you some learning time by explaining what I did, so you can do it without dealing with my struggles.

So Tweetdeck gave me my start. My starting point was what I had on my traditional Twitter page, but organized in columns.

Building On The Start

To build on your start, you're going to want to add more columns. To do that, all you have to do is go over to that narrow black column on the far left that I've done such a poor job of copying for you. Look for the + sign. You know, + as in add.

When you hit that, you get a screen full of options  that you can, indeed, add to your Tweetdeck page. They are all different kinds of columns.

Remember, the Home column is your traditional
Twitter feed. If, like me, you removed your Home and Notifications columns, you can easily put them back up. If, like me, you put everyone you followed on Twitter into lists the moment you followed them, you can make columns for any of those lists. You can make columns for any of the subjects you see here.

Hit one of these options, follow the instructions. Be sure to hit "Add Column" at the bottom of the screen. (That's right. I didn't do that at first and couldn't understand why nothing was happening.)

But What About Hashtag Columns, Gail?


Now this is where I can really save you some time. I had to do some hunting to figure this one out. 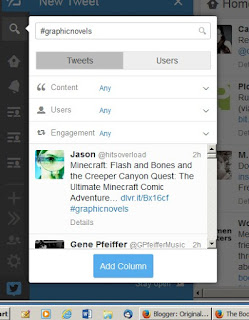 To make a hashtag column, you select "Search" from that screen full of options. Ta-da! In the little box that pops up, you type #whateveryouwant. By that I mean whatever hashtag you want to make a column for. Once you do, you'll get the box to your left. I ignore everything in it and hit "Add Column."

Now, what if you want to cut down on the number of columns by including two hashtags in one of them instead of one hashtag in two of them? Bless you, Alice Keeler at Teacher Tech for 'splaining how to do this, because I really wanted to give it a go.

This is one of those things that is mind-bogglingly simple, once you know how to do it. In that little box that pops up when you select "Search" you type both the hashtags you want to search for separated by the word "OR." As in:

Whatever you do, don't type:

If you use "AND," you'll only get tweets that use both hashtags. OR means you'll get tweets with either hashtag. This OR vs AND  thing is supposed to have something to do with Boolean logic, whatever the hell that is. But it's a cool term to use, and this is probably going to be my only chance, so there it is.

In case you hadn't noticed, you need to cap the OR.

So this is the how-to portion of our program. Next week I'll cover my positive experience with Tweetdeck once I figured out this stuff. I'll include scheduling tweets and attaching images.