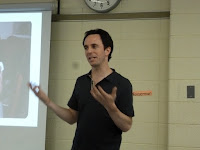 I was just writing about historical nonfiction here on Monday. Last night I spent an hour listening to Marc Tyler Nobleman's talk at the Richmond Memorial Library. He was speaking specifically about two of his books, Boys of Steel and Bill the Boy Wonder, biographies about mid-twentieth century comic book writers and illustrators. Boys of Steel is about the co-creators of Superman, and Bill the Boy Wonder is about the uncredited co-creator of Batman. So, there you go. I'm writing about historical nonfiction again.

Nobleman's description of his books and how he went about writing them illustrate a couple of points made in a Horn Book article from a few years back on contemporary children's historical nonfiction.
Attending last night's talk so soon after reading Jane Sutcliffe's The White House Is Burning makes me wonder if children's historical nonfiction won't become another area in children's literature that attracts adult readers. Well-organized presentation and new research on little-known subjects--who wouldn't want to read that?

Very interesting! It must have been great to hear him discuss this in person. If I want to learn about something quick, I often go to the kids' nonfiction section rather than wading through large adult books.

I've been known to do that, too. It can get you started on acquiring information, at the very least.