Do Child Readers Need To Understand Cool Cats To Enjoy Pete the Cat? 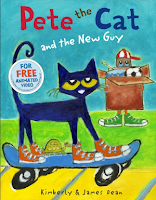 I read a couple more Pete the Cat books. Though I found them a little more instructive than I did the first one ("being different is really very cool" in Pete the Cat and the New Guy), I was struck by something about them. Pete the Cat, he's cool.

He's a cool cat in a beatnik cool way. Will the preschool through early 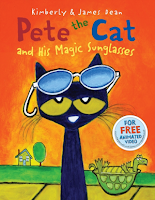 grade schoolers who will probably read these books get the beatnik references? I don't see how they can. If they don't get the cool cat beatnik joke, why do they like these books?

Because anyone can see that Pete the Cat isn't a regular cat. Even by the standards of picture book cats, there's something about this one that makes him unusual. In the world of today's children, cool isn't being different. It's meeting some standard of attractiveness. It's usually about adhering to a group in some way.

But Pete is a totally different kind of cool. He's the kind of cool that's too cool to care. He shouldn't exist in the world. That makes for incongruity.

And incongruity, my friends, is funny. That's why kids don't need to get the beatnik joke.