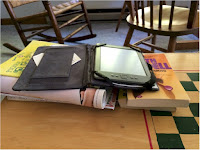 This morning I gave up on a book and shelved it in my Kindle under "Didn't Finish." I had started skimming by the 10 percent point and still ended up making the decision that life is short. There was just no reason to spend time like this.

My Kindle is loaded with goodies I download during free promotions or buy on sale.* This is my way of discovering new authors. At some point I dip into the Kindle and see what turns up. For instance, I recently found Longbourn by Jo Baker on my Kindle. Must have bought it on sale. Superb book. Believe me, I'll be remembering that writer and considering some of her other titles.

Obviously, that was not the case with the book I gave up on this morning. I hadn't been reading long when I began to suspect it was self-published. Sure enough, it was. What was the tip off?

When Self-Published Books Are Bad, They're Often Bad In The Same Way


Certainly I've read plenty of bad traditionally published books over the years. But when self-published books are bad, they're often bad in the same, recognizable way. For instance:

A bad self-published book might include many of these problems.

I have to say I've read only one self-published book that I thought was really good, Do Not Resuscitate by Nicholas Ponticello. I also thought Due North by Melanie Jackson was well done, though it didn't fit into a traditional publishing niche. However, I don't read a great many self-published books. There may be some kind of percentage thing going on with these things whereby X percent are good, and you have to read a great many in order for that X percent to amount to much in real numbers.

What About Bad Traditionally Published Books?

And Why Don't We See More Of The Self-Pubbed Problems In Traditionally Published Books?


My assumption--and it is an assumption--is that the publishing system actually works, to some extent, at least, and agents and editors screen out the tell, tell, tell stories, the stories without distinctive characters, without voice, without a well-constructed plot. And publishing companies definitely employ copy editors, so we see far fewer missing letters and gaps in lines, etc. We get far fewer of those kinds of distractions.


What Does It All Mean?


Today I was feeling very warmly toward the traditional publishing world. I felt I was unlikely to find myself reading something like the book I shelved today, if I stuck with traditional pub. Yippee doodles for Gail the Reader.

I think this makes traditional publishing what is called a mixed blessing.
____________________
*By the way, I do buy full price eBooks. I'm talking here about impulse buying sale books I've heard of and wouldn't have read otherwise or new to me items I'm willing to take a chance on because they're cheap.