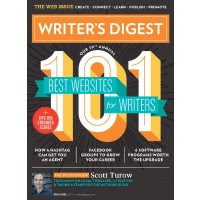 The May/June, 2017 of Writer's Digest includes an interview with Scott Turow, whose Presumed Innocent I was very taken with back in the day. The writing process he describes could be of interest for new writers limited to working on weekends.


He says that when he began writing, he only had thirty minutes a day, the length of his train ride to work in the morning. "Whatever I was feeling passionate about that I could convert into fodder for the story I was beginning to tell, I'd write down that day...and figured I'd someday put it all together." Eventually he put all these different pieces in order.

That's still how he works, generating material that way for a year for each new book. Then he begins "trying to shape it." "...over the course of the year some sequence would've begun to suggest itself to me."


For people who don't have a lot of time, new writers with day jobs, for instance, this sounds like a master plan for getting started.

Now, Think Of The Possibilities


NaNoWriMo. Okay, say working in a linear way is slow, slow, slow for you, and National Novel Writing Month is all about working fast, fast, fast. So give up the linear thing some days and jump to a spot in your project you "feel passionate" about and rack up some wordage there. Connect the pieces later, which will also provide you with some word count.

Getting Started On A New Project While Still Working On An Old One. I have that NaNoWriMo manuscript I keep talking about, and I wouldn't mind working on some short-form writing. But I also began tentative work on a brand new project last month. It keeps coming up in my mind, and, since it's YA, I can bring new material relating to it to my NESCBWI writers' group. So I'm thinking the Turow Method would be a good way to get started on this, because, as usual with a brand new idea, I don't have a complete story in mind. Working on elements that grab my interest every now and then could help me to transition into this new work and maybe even come up with a plot, storyline, story, the whole nine yards.

How could the Turow Method work for you, Weekend Writers?

Posted by Gail Gauthier at 8:31 PM
Email ThisBlogThis!Share to TwitterShare to FacebookShare to Pinterest
Labels: Scott Turow, The Weekend Writer