The Halo Effect And My Retreat Week

In spite of starting our 2018 retreat week in sub-zero weather and ending it a day early in a downpour in order to avoid a deep freeze and four to eight inches of snow, I had an incredible experience. Both stimulating and creative.

I brought professional reading with me that had looked pretty pointless at home. Up in the mountains it became significant. I mean really, really significant. I came up with all kinds of ideas for essays and blog posts and ways to manage my writing time. I even wrote those ideas down, so I'd  find them and use them later. I thought of a way to do that (find them again) on retreat week. We’re talking about ideas that are going to change my writing life. Heck, my whole life.

I have never attended any professional writers' event that was as marvelous intellectually as my personal retreat last week.


As I’ve mentioned here before, long, long ago in a galaxy far away, I worked for management development consultants who ran “short, intensive learning experiences,”such as workshops, conferences, and retreats. In asking for participant assessments of these programs, they worried about the halo effect, "a well documented social-psychology phenomenon that causes people to be biased in their judgments by transferring their feelings about one attribute of something to other, unrelated, attributes." (The Nielsen Norman Group) For instance, the feeling that a program was terrific because the respondent liked the instructor, met some cool new people, and enjoyed lunch.

Or in my case, feeling creatively stimulated because I read whatever I wanted and as much as I wanted, snowshoed on new trails, and used an empty and beautiful yoga room for two lengthy tai chi practices. (Tai chi doesn't provide much of an endorphin surge, in my experience, but even that will leave you pumped up a bit if you do it for 45 to 60 minutes.) Also, in this retreaty place I did writing sketches (which will be discussed in an upcoming blog post) without worrying about finishing anything.

Who wouldn't feel out of their freaking minds with creativity?

But Is The Halo Effect The Mark Of A Successful Retreat? 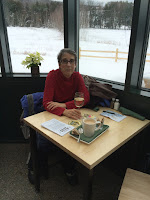 A retreat, conference, workshop or other "short, intensive learning experience," as my former bosses called them, is not successful just because you have a really terrific time while you're there. I was also eating out in restaurants regularly last week and reading in front of a wood fire. Who isn't going to have a terrific time under those circumstances? A learning experience is only successful, if  you are able to bring a new skill set back to your workplace and use it. The experience has to change your behavior. For the better, I guess we should add.

Now, I had a lot of great new ideas and thoughts that are unformed ideas last week. I've been around the writers' conference/workshop/retreat track a few times, and I think it's unlikely that everything that went on in my mind is going to make it into my work week. I'm hopeful that some of it will, especially since I was able to start using a couple of things last week. But only time will tell if Retreat Week 2018 was as great as I felt it was while I was living it.

Stay tuned to hear more, because I have lots of retreat blog posts started.

Our writing group is this year considering a retreat together -- and since three of us have no kids at home, we're not convinced it's "important." And yet. So, we'll be reading your posts with interest.

I don't have kids at home, either, but home is still full of time consuming responsibilities.

I don't try to write when I go to this place. This time I didn't even bring my laptop, just my iPad, which was loaded with bookmarked articles on time management, meditation and some other stuff. I brought professional reading I'd fallen behind on--writing mags and The Horn Book. Maybe just being in a different place where you don't HAVE to do anything frees your mind and you perceive the things you're reading differently, more creatively. I was roughing out blog posts, jotting down ideas for a project I've just started, making lists all on my iPad and e-mailing them to my laptop so I could copy and paste them into work.

The other kinds of retreats I've been to were a couple run by the SCBWI, and they were really mini-conferences rather than retreats--weekends with workshops and speakers most of the day, but the venue is woodsy.

So I have no experience with the kind of retreat where a writer is retreating to truly write.