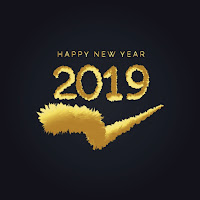 Yesterday I finished a 5-day final push to finish the draft of an adult book that I wanted to complete in 2018. I cranked out 3 times the amount of new material that I normally would in that period, though there are a lot of place holders, and I realized I needed to develop a thread more fully in draft 2 with an additional chapter at the mid-point. So while the project is nowhere near done, it's done enough so I can start this new unit of time, meaning the new year, with a change of work focus. Good Women can rest until the beginning of February.

It was a tense December working on this, and the last five days were brutal. I mention that to explain why I am ridiculously happy this is over. Giddy.

Goal 1. Work on short-form writing, essays and short stories. This will be adult work, primarily, something that I've been interested in for a long time, but couldn't get to. It's also the only work I've been able to publish for several years, so it makes some sense to put some energy into this. Also, given my family's attraction to health problems I may be able to handle shorter types of work more easily than novels. Writing a novel requires staying in the world you're working with, something that's difficult for me to do when I'm off to nursing homes, doctor's offices, independent living facilities, and new baby's homes, two or three days a week.


Goal 3. Work on the YA thriller just enough so I'll have material to take to my SCBWI writers' group.


Goal 4. Complete a second draft of Good Women by September. I would like to set an earlier deadline, but given the turmoil we've had the last two years, I've decided to give myself a long time. If I'm done earlier, how clever of me?


Goal 6. Expect the end of the year to be a disaster. Don't fall behind on goals so that I have to struggle to catch up while dealing with the holidays.

Checking In With Goals


For a year or two, I was creating a done list each Friday, with which I checked to make sure I'd worked on goals that week. I found it very helpful, but also a little time consuming. It was one of the first things I gave up last summer when that family member fell ill. This year I'm going to try to do it just once a month.

I mention this because, as I just said, it was helpful, especially with the social media goals. I would hustle Thursday night to get things done, because I knew I had to report the next day. You might want to try it.