Another Earth Day month, another attempt to fire up the Environmental Book Club for a few weeks.

Today I am directing your attention to Dragonfly.Eco, a site that describes itself as "an exploration of eco-fiction." Dragonfly appears to be quite extensive, so much so that it includes a Tour Guide. It also has an 800+ entry database that can be searched in multiple ways, including Children's  and YA/Teen. And Humor.

FASCINATING UPDATE: I noticed this morning on the Dragonfly.Eco  Tour Guide page that Dragonfly.Eco is a new domain for an older site called eco-fiction.com. That sort of floated past the reasoning portion of my brain. I had also noticed that Dragonfly.Eco and I follow each other on Twitter, with Dragonfly.Eco using @Eco-Fiction as its Twitter handle. Again that knowledge didn't actually lodge anywhere. But, hey, in addition to working on this post, I was working on a Twitter challenge, a book chapter, and some research.

So, this afternoon, instead of continuing to work, which I obviously should have been doing, I went walking. And I'm off in the woods, on this narrow trail, headed for a waterfall, when eco-fiction pops up into my mind.  Eco-fiction! Back when Google+ was a thing and not a memory, I was a member of an eco-fiction community there. It was connected to a website with a database of books and the woman who moderated everything accepted Saving the Planet & Stuff for said database. 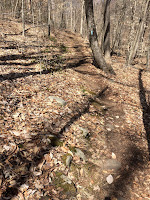 My point being, oh, my gosh! I know these people!

This is a classic example of a breakout experience, by the way. Content entered my mind--the information about Dragonfly having originally been eco-fiction and my Twitter connection with it. I left the work world behind to do something totally unrelated that didn't require mental heavy lifting on my part. While my body and mind were relaxed, the tie-in between Dragonfly and my memory of eco-fiction broke out. 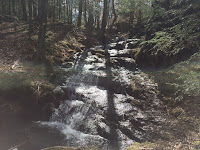 I'm including a picture of the waterfall we saw today just because. I mean totally unconnected to anything.