You may recall that I spent last week on a home-based, DIY sewing retreat. In my sewing/laundry room. In my cellar. In part it was to get rid of some sewing work that was hanging over my head. In part it was due to the weight of run-of-the-mill chaos on my shoulders. In part it was because I thought spending time on one kind of creativity would benefit my writing, because creativity spurs creativity.

This retreat worked on all counts. 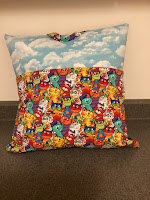 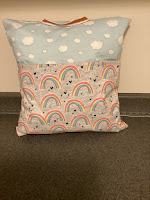 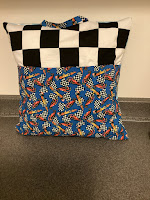 The Benefit To My Writing 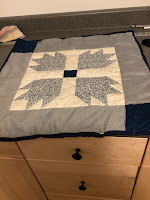 Last week I came up with various ideas for my work in progress. I will admit that early most mornings I spent a little time reading a chapter of that. But the bulk of my days involved sewing. The writing "work" that did came about as a side benefit should help a great deal with moving forward on this manuscript.
What we're talking about here are breakout experiences, which occur when you've absorbed material about some project/work problem and then moved away from it. They can happen while driving, showering, walking, or doing anything that either engages your mind minimally or in a different way from the original project.
I came away from this retreat not only with new work material but with new energy, as if getting back from a vacation that involved some relaxation. 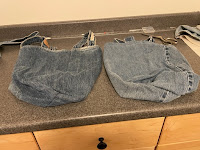 I can't claim this retreat was modeled on what I think of as traditional writers' retreats--go into a cabin and write. I've never been to one of those. The few writers' retreats I've attended were called retreats but were actually short conferences with all the time committed to presentations of some sort.
This was modeled more on retreats my sister has attended for rubber stampers. Those appear to be intensive work times, with people sitting at long tables with materials they've brought with them and working all day, into the evening. The photograph I saw of one of those events had a sweatshop quality to it.  Those people generate work.
I will definitely do something like this again, creating a retreat around some kind of necessary creation, when I'm at a struggling point with a project and/or feeling overwhelmed.
EDITED To Add:

Last week's sewing included binding some pieces from a quilt I'd taken apart last year to make wall hangings and using some of my extensive collection of old denim to make shopping bags. The engineer at my house referred to all that as "creative repurposing."
Repurposing is something I've done with writing, too, reworking older pieces. Earlier this month I did it with You Are the Parents of Sixth Graders. Act Like It, humor for adults that began years ago as a short story for middle grade readers.
Posted by Gail Gauthier at 12:42 PM
Email ThisBlogThis!Share to TwitterShare to FacebookShare to Pinterest
Labels: creativity, retreats, unnecessary creativity