Seeking Balance In All Things 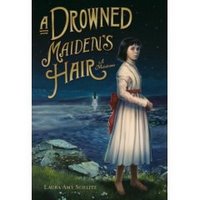 A few days ago, Liz at A Chair, A Fireplace, & A Tea Cozy passed on a question from another blogger--What is the recipe for good historical fiction?. I happened to be reading A Drowned Maiden's Hair by Laura Amy Schlitz at the time, so I gave the question some thought.

I like to see balance in most things, anyway, but especially in writing. All the elements of fiction--plot, character, setting, point of view, voice, and theme--need to be attended to equally. This is much, much easier said than done. That's why you end up with books that are said to be plot-driven or character-driven. And sometimes, particularly in YA, you end up with books that are all voice. The plot is ridiculous, the characters are stereotypes, but there's a voice that someone thought would carry the day.

The elements are beautifully balanced in A Drowned Maiden's Hair.

Young Maud, an orphan, is adopted out-of-the-blue by two elderly sisters who lavish her with new clothes on their way home to their large home, but then make her hide in the attic when guests come. Tough, smart Maudie has been adopted for a reason, and when she learns that reason she makes a sincere effort to play her part in her beloved new Aunt Hyacinth's plan.

Aunt Hyacinth is lovely, charming, witty, flirtatious, stylish, and smart. She's a wonder. And easily in her sixties. What a stroke of genious to make this heavy an older woman. (Think Blythe Danner)

Maud, herself, is a wonderfully controlled character. She is angry and needy and smart and stubborn and conniving and heartbreaking and bad and good and wryly funny. She has a voice, in spite of being a third-person character. The absolute easiest way to create a voice for a character is to write in the first person. Maud is really quite an accomplishment.

She is also a point-of-view character, by the way. She's in every scene. Everything is seen from her perspective.

So we have setting, plot, character, voice, and point of view. Hmmm. What does that leave? Oh, yeah. Theme.

Right and wrong, people. It's as simple as that. Good vs. bad.

So if you want a recipe for good historical fiction, take a look at A Drowned Maiden's Hair.