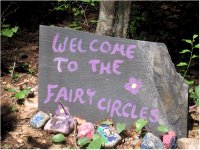 Back in April I posted A Hiking Story With Fairies, but I had no pictures to illustrate it. Today I went back to the Fairy Circles, an area within a park within a state forest. This place is such a fixture that it's actually included on the trail maps. 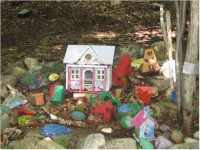 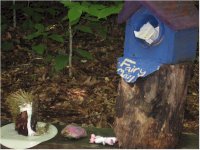 Then there is my own personal favorite, Fairy Cobra guarding a fairy dwelling. (Hope you can see it.) 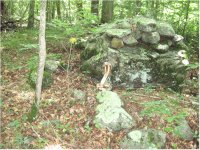 We're in the midst of monsoon season here in southern New England, and though it had stopped raining around 8:30 this morning, the park was steamy and jungle-like. The Fairy Circles weren't quite as adorable as I remember them being back in April. In fact, one of the people with me said, "This just gets creepier and creepier," as we walked among them. One family member who has worked in an after school child care center told us that kids she worked with would build little fairy structures like the ones we were looking at and pretend that they, themselves, were the fairies living in them.

But they'd fail to tell anyone else that these were their fairy homes and the little domiciles would end up being destroyed. Sobbing, chest-beating, and tearing of hair ensued.

I bet those kids will grow up to hate fairies.
Posted by Gail Gauthier at 8:06 PM
Email ThisBlogThis!Share to TwitterShare to FacebookShare to Pinterest