The Story Of A Boy And The Woman Who Loves Him 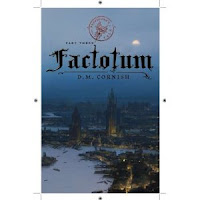 Perhaps some of you remember when, a year or so ago, I was seeing father stories everywhere. Well, in Factotum by D.M. Cornish I'm seeing a mother/son bond between an impressively nonmaternal woman and her "little man," who doesn't even notice her lack of hugs and kisses because he's never known anything like a mother, anyway. Or a father, either.

Factotum is the concluding book in what used to be known as the Monster Blood Tattoo trilogy but has been renamed The Foundling's Tale trilogy, at least in this country. (The author is Australian and the series has retained its original name somewhere, presumably there.) It's set in a world called the Half-Continent in which everymen must protect themselves from a wide array of different types of monsters. Some monsters are truly monsterish, others far less so.

The first book, The Foundling, was a journey story about young Rossamund leaving the orphanage in which he's always lived to travel to Wintersmill where he is to train as a lamplighter, one of the people who light lamps along the highway late in the day and then put them out early in the morning. He's kidnapped along the way and falls in with an aristocratic and personally powerful monster killer, Europe, who is one kickass woman. The second book, Lamplighter, is about identity. Rossamund is beginning on what he believes is to be his life's work. But questions arise about just who he is, questions that put him in danger. In Factotum Rossamund is now a general and rather important assistant to Europe. (By the way, I want my own factotum.) It becomes clear early on in this volume just who he is. The question dealt with for the rest of the book is what will become of him because of it?

I found the plot murkier in Factotum than in the earlier books. It wasn't until the end that I realized that someone (who shall remain nameless so as to avoid spoilers) had been guiding things for a while. Before that events seemed a little random to me. Things get a little rushed toward the end of this book, too. Some bad guys from book two are dispatched offstage, for instance. Someone comes and tells the main characters about it in order to take care of that old storyline. Anyone who stumbles upon this book without having read the first two is going to have a difficult time, since there are references to characters in earlier books who never appear here. You really need to treat this trilogy as a serial and read it as such.

One of the strongest assets of these books is the world building. But this time I felt almost overwhelmed by it. There are so many created people and things that I often felt as if I were reading a foreign language. Factotum, like the earlier books in the series, includes a glossary. I found myself using it the way I would a French dictionary.

Nonetheless, The Foundling's Tale deals with a lot of true YA themes within its demanding setting. Who am I? What am I going to be? How do I separate from loved ones? And though it includes a very powerful adult character, she frequently needs the assistance of the child protagonist. You don't have a grown-up fixing everything here.

This past year I read two series, one of which included eighteen or nineteen books. The thing I learned from those experiences is that the best way to read a series is all at once--just get yourself into that world and stay there for the duration. Now that The Foundling's Tale is completed, readers can do just that.

A letter from the editor, which came with the ARC, suggested that while Rossamund's tale is done, the author may be writing more books set in his world, the Half-Continent.

Factotum will be published in November.

NOTE: This post was edited to eliminate a spoiler.
Posted by Gail Gauthier at 6:25 PM
Email ThisBlogThis!Share to TwitterShare to FacebookShare to Pinterest
Labels: fantasy, Monster Blood Tattoo, Reader response