A Story Of The Young Jimi Hendrix

Gary Golio is both a child therapist and a fine artist, and you can see his interests in children and the arts merging in his new book, Jimi: Sounds Like A Rainbow - A Story of the Young Jimi Hendrix. It’s the first of three picture book biographies he has coming out in the next two years. Golio has said that as a child he enjoyed reading about the lives of artists because he wanted to know how to become one and how other people did it. We corresponded recently about how Jimi Hendrix did it for Day 4 of the blog tour for Jimi: Sounds Like A Rainbow.

Jimi Hendrix is an iconic figure of the 1960s. According to his official website, his "innovative style of combining fuzz, feedback and controlled distortion created a new musical form." Golio’s take on Hendrix is that the musician "thought of the guitar as more of a sound machine than a traditional instrument." "Hip-hop artists, classical musicians, jazz and pop players have all been influenced by Jimi’s approach to his instrument," he says, "as well as his boundary-less take on music and creativity in general."

That mix of innovation and influence means that Jimi Hendrix has historic or at least cultural significance, making him an attractive subject for a biographer. But why a biography for children?

Javaka Steptoe, Jimi: Sounds Like A Rainbow’s illustrator, describes the book as being "about the creative process of an artist." More specifically, it’s about the creative process of a particular child becoming an artist. This child didn’t have the benefit of the traditional music training so many of us provide for our young today with private lessons, music in the schools, etc. The boy portrayed in the book wears worn-out clothes and moves frequently because his father is often out of work. He begins his music training strumming on an old broom before moving up to a five-dollar guitar.

Golio describes the young Hendrix as having "a serious sense of determination and commitment in regard to his music," something he believes child readers will understand. "In fact, the yearning to play music can drive a kid to practice and improve regardless of the equipment. I’m also a big believer in the 'competency model' of human development, which places emphasis on how wanting to be good at something can motivate a person to grow, make changes, and accomplish personal goals. It’s a model kids relate to, because it’s ego-enhancing and suits those who are more independently-minded."

An Element Of Mystery In The Hendrix Story

In Jimi: Sounds Like A Rainbow, Golio uses a lot of imagery related to color. He describes colors connected with natural sounds and says that the young Jimi wondered if someone could paint pictures with sound. "With every sound, a color glowed in Jimmy’s mind." When questioned about the significance of color for Hendrix, Golio said that he had "a very deep and personal connection with color and sound that influenced his thinking, his perception of the world, his experience of life, and his music-making. Many of his songs focus on the interplay between color and sound (Bold As Love, One Rainy Wish, May This Be Love…), and Jimi himself told friends and associates that he played colors—not notes—to evoke emotions and paint pictures in people’s minds."

Hendrix sometimes appears on lists of musicians who experienced synesthesia, a condition in which one type of sensory stimulation is paired with another, unrelated sense. Golio is careful not to diagnose or label him, saying only that he believes Hendrix was gifted. "In truth, whatever forms the totality of any person—particularly a creative one—is a mystery…"

A Hendrix Story For Everybody 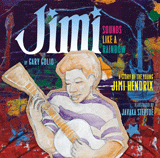 The basic story told in Jimi: Sounds Like A Rainbow is about a determined and committed child sticking with one thing until he could not only do it, but transform it. It’s the kind of book the young Golio used to look for himself—a story of how one person became an artist. The author doesn’t see children as being the book’s only audience, though. "… a picture book is a work of art, to be read and enjoyed by anybody and everybody, regardless of age," he says. "Jimi is for everybody, and I picture the Seattle Guitarmaster sitting in Music Heaven, reading a copy with a broad grin gracing his lovely face."

Gary Golio did an excellent guest post at Mitali's Fire Escape on how race and racism affected Hendrix. You can also listen to a very fine interview he did with Jordan Rich of WBZ AM in Boston.

The Sounds Like A Rainbow blog tour continues with the following stops:

I thought this was such an excellent book. I gave my copy to the music teacher where I was working because I know she will use it with the children. I can imagine her teaching the "Star Spangled Banner" lesson with Hendrix's version included.