The End Of My Own Cybilizing This Year 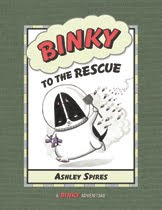 I happened to have a couple of Cybil nominees in my TBR pile, and I've finally finished them. Which is a good thing because they're due at the library tomorrow.

Binky to the Rescue by Ashley Spires is a very clever and charming graphic novel for younger readers. The basic premise is that Binky, an indoor cat, believes that the outdoors is outer space. Insects that come into the house from outside are aliens. When Binky accidentally goes through a window, he's truly out in the great unknown. He manages to survive the ordeal, but his dear friend, Ted, has been stranded out there. Thus, Binky to the rescue.

Marcus Sedgwick began his review of Enchanted Glass by Diana Wynne Jones with the line "It's always the sign of a truly accomplished writer when their book holds you, despite the fact that not awfully much happens." That's exactly how I felt about Enchanted Glass. I enjoyed reading it, liked slipping into that world, but when I finished it, I thought...Did much happen here?

In an interesting twist, there is also an adult character who is learning things about himself in this book. Adult Andrew Hope and young Aidan Cain are almost co-protagonists.

Wynne Jones is very good at dealing with powerful adult characters in children's books. They don't take over the story or overwhelm the kids. That's true here, too.

Enchanted Glass's ending reminded me of The Pinhoe Egg's in that both books are wrapped up with what I can only describe as a bizarre twist relating to what some people would call morality. In the case of Enchanted Glass, the ending also seemed to be essentially saying that the action of the book had all been a big mistake.

I had the feeling that this book could be the jumping off point to a series. I'd be happy to see that happen, and if that's the plan, I hope Wynne Jones gets the opportunity to do it.
Posted by Gail Gauthier at 8:23 PM
Email ThisBlogThis!Share to TwitterShare to FacebookShare to Pinterest
Labels: Diana Wynne Jones, fantasy, Reader response