I Could Have Enjoyed This A Lot More 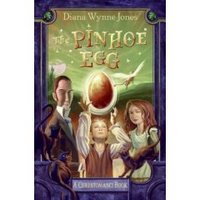 Right around the time I started reading ThePinhoe Egg by Diana Wynne Jones, J.L. Bell mentioned it at Oz and Ends in a post on "fat fantasies." He contends that the text of The Pinhoe Egg is laid out in such a way that it ends up being a bigger book than it needs to be.

I'd argue that in addition the book is bigger than it needs to be because the writing could have been a whole lot tighter. The book includes sections on say, grandma's mental state or whether or not a kid is going to get a horse, that go on and on. All the extra material doesn't serve the story.

And the story is interesting. The Pinhoe Egg is part of the Chrestomanci Series, though I didn't have any trouble reading it as a stand alone. At least, I don't think I did. Evidently in the Chrestomanci universe there are a number of worlds, and in the one that appears in this book everyone is capable of magic. It's part of the characters' every day lives.

I had the feeling this world was similar to that of an early twentieth century novel with a couple of the large eccentric families you see in English novels from that period. One of these families, the Pinhoes, is very extended and is made up of every day folks in the village. The other family seems a little more aristocratic--Chrestomanci's family, the people in the castle.

The Pinhoes don't want Chrestomanci and his family intruding in their lives. In addition, the Pinhoes are feuding with the Farleighs, mainly due to their matriarch's mental incapacity, which appears to have been caused by a Fairleigh.

Now, I like all this. I think this whole situation and the many charming characters Wynne Jones creates could have made a really fine book. But things just take so-o-o-o long here. The magical creatures who become important later in the story (the Pinhoe's egg among them) don't seem very well integrated. The climax is undermined by a deus ex machina device in which Chrestomanci just sits down and explains everything to everyone. And then the resolution of the grandmother problem is seriously disturbing and totally brushed off.

It has occurred to me that since this is a series, these characters may be beloved by readers who are happy to read anything about them at all. I understand that. And I also wondered if some Chrestomanci series readers would tell me that if I'd read Book 2, Chapter 5, I would see everything differently. However, some of the books in this series go back to the 1970s and '80s. I certainly admire continuing to write about this world over that period of time, but it seems unreasonable to expect readers to retain material over twenty to thirty years.

I mean, it's not like we're talking Star Trek here.
Posted by Gail Gauthier at 7:17 PM
Email ThisBlogThis!Share to TwitterShare to FacebookShare to Pinterest

I thought this book fell a little flat, too. I haven't read any of the previous Chrestomanci books either, though, and I think I'd like to....

I haven't read this book, but in the Star Trek book universe, there are events and characters from previous books (as well as the TV series and movies) that are mentioned in a given book. However, you generally do not need to know about these events and characters to understand the current book as the authors will generally provide enough of a background to bring you up to speed.

Why, thank you, civilguy. I'm delighted to see you delurk. I also apologize for the cheap Star Trek joke. I was referring to the stereotype that assumes Star Trek fans share vast knowledge of the Star Trek universe.

This reminds me of something I've wondered about in the past, though: There are book series that are directed to adults. (Star Trek, Star Wars books, traditional mystery series, etc.) Do they require as much knowledge of the series' "universes" as some of these series/serials directed to children and YA? Do they usually stand alone better? (Certainly the traditional mystery novels of the 1920s and '30s did.)

If so, why so? Why is it acceptable to expect young readers to read Vol. A through C before D but not to expect adult readers to do so?

Actually, Star Trek is probably not a true series in the sense I think you are using. There is an overall Star Trek universe, but generally each novel stands alone. If you know the basics of the characters, you don't have to have read novel 'A' to understand novel 'B'. There are a few true sequential book storylines. A better series example would be Harry Turtledove's 4 book Worldwar series. In these, if you haven't read book 'A', you are going to be confused reading book 'B'.