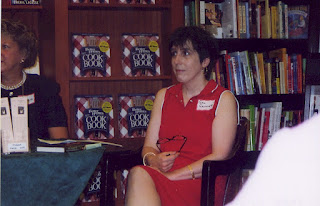 I created Original Content ten years ago today. The thing existed for six years before it occurred to me to mark an anniversary. Observations of the day were hit and miss after that.

We're going to observe this particular anniversay in a bigger way. For the next 10 days, I'll be republishing a post from each year of OC's existence. I'm choosing posts that I think relate in some way to what's been going on here on the Internet or in publishing or that are representative of one of my many obsessions. I'll be starting those today. The Time Management Tuesday post will come from the archive.

But, first, a quick overall impression of how blogging has changed in the decade I've been doing it:

1. I've said this before, I know. When I began blogging, there were only a handful of children's literature blogs. Around 2005/06, we went through a big growth spurt that I like to think of as the frontier period. There were no organizations, no tours, there was just blogging and informal communities of bloggers grew up around the act. That was my favorite time. The explosion kept moving on and on, though, and the number of blogs has become much larger than many of us can keep up with. The audience for any particular type of blog is probably finite and with so many bloggers competing for it, not many will be successful in achieving much of a readership. It's not a great time to be a new blogger, IMHO.

2. Another thing I've noticed is that the structure/format of blogs has changed. Back in the day, it was a specific short form. (I often refer to what I do here as "flash nonfiction.") A blog post was supposed to be short, with links to other material that bloggers were commenting upon or using for support for what they had to say. Blog of a Bookslut is a good example. Nowadays you often see more traditional long-form writing published as blog posts, lengthy book reviews, for instance, and essays that years ago might have appeared as part of a newspaper column. The "read more" hyper link on many blogs is an attempt to maintain the appearance of the short form by hiding a lot of the text.

There's nothing wrong in blog posts becoming lengthier. I have trouble controlling my flash nonfiction, myself. What is interesting about this situation, though, is that in the past there were all kinds of concerns about the impact the Internet would have on traditional media. But in this particular case, I think the writing style of traditional media has moved right into blogs, thus impacting the Internet.

The picture above is from 2002. I am grayer now, and you won't see me holding my glasses in my hand these days. I still own that dress, though, and I can still get into it. I suspect that's a metaphor for this blog--superficially changed by time, fundamentally the same.
Posted by Gail Gauthier at 9:39 AM
Email ThisBlogThis!Share to TwitterShare to FacebookShare to Pinterest
Labels: blogging, Gail the Center of the Universe