This is the tenth of my ten Tenth Anniversary posts. Enough about the past. You know what the Zenny-types say--don't regret the past or be anxious about the future. Stay in the present. Presently I am rewriting one of my unpublished manuscripts, moving it from a children's book to one for adults, which leads to today's repost.

I frequently read adult books with child main characters (The Gates by John Connolly, for instance, and I'm reading Alice Bliss by Laura Harrington now), and what makes those books adult books versus children's books is something I give a lot of thought to. I'll be thinking about it even more the next couple of months.

Today's anniversary post doesn't involve an adult book with a child main character, but it does involve an author rewriting his children's book as a film for adults. In this case, he shifted the main character from a child to an adult, which I don't plan to do. Nonetheless, reading the book and watching the movie is an interesting experience because you can see the shift from children's to adults' story.

January 3, 2011 A Great Illustration Of The Difference Between Adult And Children's Literature

The day after Christmas, PBS ran a production of Framed on Masterpiece Theater, which I just finished watching today. The TV film stayed pretty close to my recollection of the book. What was incredibly--incredibly--fascinating about it was that the book is a children's book. The film is a mainstream adult production.

While I can't recall every moment by the book, of course, it appears to me that all Frank Cottrell Boyce, who wrote both the book and the adaptation, did differently was focus on the adult museum character in the movie, while he focused on the child character in the book. In an essay at the PBS website, he says, "The film just became a thing of its own — less about the little boy who narrates the book and more about the love story between the grown-ups." Last week I wrote about how theme can make the difference between an adult and YA book. Here it's a matter of character making the difference between a story for children and one for adults.

The film begins and ends with Quentin Lester, the adult. He is the character who evolves during the story. The kids still have the best action, but at the end we don't see what has changed in their lives. It's pretty much how the kids' actions impact Quentin that matters. The story has, indeed, been turned into an adult romance. 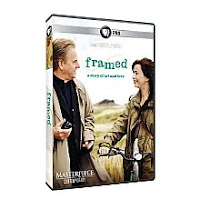 You can even see the difference when you look at the covers of the book and the DVD. The book has a child character on the cover. The DVD has two adults.

I have no problem with this, myself. I like the idea of an author reworking material in different ways. I don't know how I'd feel if I were going to sit down to watch the show with the kiddies after we'd all read the book, but since I wasn't doing that, I found the movie intriguing.

Years ago a friend showed me a short story she was thinking of submitting to a magazine running a contest for a children's story. I had to point out to her that her story was about the mother and not her kids, thus it wasn't a children's story. Whose point of view to concentrate on is a concept that some people have trouble with. I think reading Framed and watching the adaptation would be a wonderful case study for very new writers illustrating this very basic difference between children's and adult fiction.
Posted by Gail Gauthier at 6:53 PM
Email ThisBlogThis!Share to TwitterShare to FacebookShare to Pinterest